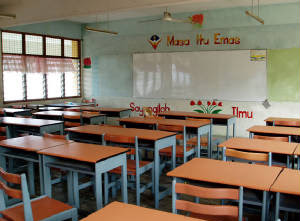 OPTED ....Fourteen percent of schools in Sarawak have opted to use English in their Maths and Science, but parents doubt the Education Ministry's commitment to their choice.

KUCHING: With schools set to begin their term next week, parents and teachers in Sarawak are in a dilemma over “inconsistent” education policies and the lack of English language books for Mathematics and Science subjects.

Some 14% of primary and secondary schools in in East Malaysian state have opted to continue learning Mathematics and Science in English next year, but have failed to receive their English text books todate.

Said Batu Lintang assemblyman See Chee How: “On this eve of the opening of the new school year, it is discovered that schools in Sarawak have not received their English textbooks and workbooks, but only the Bahasa Malaysia versions were distributed to all the students.

“This is despite the fact that these schools have filled in and submitted a designated form distributed by the Education Department asking them to decide and indicate whether their primary school students from the PPSMI batch chooses to continue PPSMI fully in English, Bahasa Malaysia or both.

“These schools have expressly opted for English language for those students now in Standard 4 to Standard 6.

“In fact, it was the Deputy PM (Muhyiddin Yassin) himself who revealed last year that 5% from the total classes in 7,495 primary schools and 9% out of 2,192 secondary schools chose to fully used English for Maths and Science.

“The schools were given the textbooks and workbooks in Bahasa Malaysia instead.”

He added that a quick survey in the bookshops had shown that no English reference books are prepared and printed in English, as the profit-driven private companies are switching immediately to produce reference texts and workbooks for the policy of MBMMBI (Upholding the Malay Language, Strengthening the English Language) whereby Mathematics and Science are only taught and learned in Bahasa Malaysia.

See, who is also state PKR vice president, said parents were now doubtful as to whether or not the Education Department has the contents and syllabus of the books prepared.

“The schools and parents can’t be blamed for their doubts and queries as to whether the education department is going to supply the requisite textbooks and workbooks in English to these schools.

“There are even doubts whether the education department has the syllabus and contents of the textbooks and workbooks prepared and whether it is printing them,” he said.

See said the availability of Malay language books on the subjects meant teachers and parents were forced to translate the syllabus and contents, according to their own respective understanding and perception of the Bahasa Malaysia texts.

“It certainly reflects poorly on the Umno-led BN federal government. The Education Ministry should have the proper planning in the formulation and implementation of the country’s education policies and plans.

“The Deputy PM and Education Minister (Muhyiddin) has failed to appreciate the sensitivity and special needs in the East Malaysian states, particularly Sarawak, where English is also an official language and that special rights to use English is cherished and dear to Sarawakians.

“The inconsistency in the formulation and implementation of the educational policies, regulations, guidelines and instructions are the hallmark of his ministership. He is the country’s worst Education Minister,” he said.