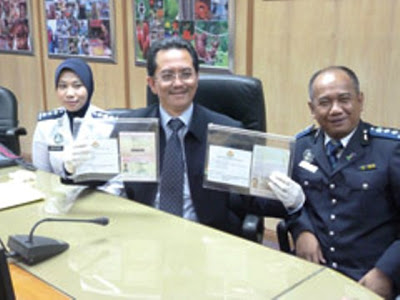 KOTA KINABALU: An Iranian man who used a fake passport to travel to Sabah has been arrested. He was detained by immigration officers when he arrived at Terminal One of the Kota Kinabalu International Airport from Brunei on December 14 at 7pm.

State immigration director Datuk Mohammad Mentek told a press conference at Wisma Dang Bandang here yesterday that airport immigration officers grew suspicious when the Iranian presented his passport when asked to do so.

Masoud Kheirollah, 29, then admitted that he bought the ‘Spanish passport’ for USD4,000. The immigration officers detained him after that.

“He intended to stay in Kota Kinabalu for one or two days before travelling to his next destination. And he also told my officers that he was afraid he could not come in if he used his Iranian passport which was kept inside his luggage,” Mohammad said.

He added that the Iranian has been further remanded under Section 117 of the Criminal Code and that the case has been fixed for case management on December 21.

The offence is framed under Section 12 (1) (b) of the Passport Act 1966 and the suspect is liable to a fine of not more than RM 10, 000 or a jail term not exceeding five years or both in the event of a conviction.

Meanwhile, Mohammad said the Iranian is being held at the Kimanis Detention Centre in Papar.

He also said they have dealt with 51 immigration offence cases at Terminal One and Two between January and December 17 this year.

“We caught two persons under the Passport Act, six for overstaying, 21 for fake endorsements, 22 for using fake travel documents and IDs belonging to others.
Posted by sabahkini.net at 10:08