MAYAN’S DOOMSDAY PREDICTION FOR NOTHING 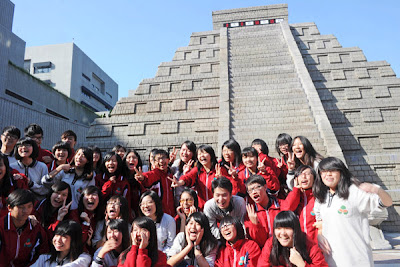 CHEER ......Students from the middle school cheer in front of a replica of a Mayan pyramid before a count-down ceremony organized by the National Museum of Natural Science to help ensure the public it is not the end of the world, in central Taichung,  Credit Photo – AFP

KUCHING: Dec 21, 2012, singled out by the Mayan ‘Long Count’ calendar as the end of a 5,000-year era and the end of the world was another prediction over the centuries proven wrong.

The prediction had caused many people, especially diehard doomsayers around the world, much fear yesterday.

On the other hand, many were the least bit concerned as they knew that it will be another unfounded prediction that had been disregarded by many Christian leaders even from the very beginning.

“There had been many predictions over the centuries on the end of the world.

“One was by Harold Camping who predicted that the second coming of Jesus Christ would be on May 21, 2011, when the righteous would rise up to heaven and following that, there will be five months of fire, brimstone and plagues on earth with millions of people dying each day, culminating on Oct 21, 2011 with the final destruction of the world.

“He had previously predicted that Judgment Day would occur on or about Sept 6, 1994 and all these predictions had proven to be wrong,” he said.

Quoting the Holy Bible, Trevor said the gospel of Matthew chapters 24 and 25 repeatedly say that no one knows exactly the day or the hour of the second coming of Jesus Christ.

“Hence, the Bible warns us to be watchful and ready at all times for the Son of Man will come at an hour you and me do not expect,” he said.

Another church leader, Pastor Rabbu Mawat from the United Pentecostal Church (UPC) Kuching for the Bahasa section, said the end of the world could not be predicted.

“For us Christians, the right thing for us to do is go back to our Bible and see what our Creator told us about the end of the world. When Jesus Christ came to this world, he told his followers and believers that he came not to pass judgment on people but instead to save them.

“Among others, he taught us to repent and obey his commandments and prepare for his second coming. The Bible also tells us that Jesus will come for a second time and that will be the end of the world but of his second coming, the scripture says he will be coming like a thief who comes in the middle of the night when the house owner is fast asleep,” he said.

He said based on that, no one in this world would be able to tell when would be the end of the world, adding what was important was for no man to die in his sins.

“For that, the Bible in Acts of Apostles chapter two, verse 38 says we should repent, be baptised in the name of Jesus Christ for the remission of our sins because only after our sins are remitted can we have the hope of being righteous in front of God,” he explained.

As such, he said, Christians should not believe in predictions with regards to the supposed end of the world because nobody will be able to know.

“Predictions to that effect are all unbiblical and as Christians, we must only believe what is written in the Bible and nothing else,” he stated. (BP)
Posted by sabahkini.net at 11:30