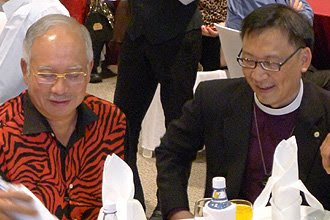 KOTA KINABALU: Prime Minister Najib Tun Razak has been asked to stop his 'public relations stunts' and instead deal with the biased treatment his federal administration has meted out to Christians in Sabah and Sarawak.

Demanding that Najib “walk his talk”, a local NGO, Borneo’s Plight in Malaysia Foundation (BoPiMaFo), said the PM’s “nice words” in his Christmas message yesterday, rang “hollow as far as sincerity and truth is concerned” when compared to the “real situation” in Malaysia affecting Christians.

The foundation’s president Daniel Jambun said that in Sabah especially, the “Christian community continued to be increasingly marginalised and victimised by loads of actions from Najib’s ruling party Umno.”

“This Christmas time is for Najib to ponder and really hear the Christians on the issue of fairness and justice.

“In Sabah especially, we are constantly being marginalised. Christians face difficulty in building their own churches, mission schools are in a sorry state, there’s marginalisation in scholarships and government jobs and promotions.

“What justice does he speak of if mosques, suraus and even madrasahs and all their officials like imam, bilal, missionaries are being salaried from taxes the government collected from us the rakyat while our churches and officials are being left out only for the faithfuls to support?

“And on top of that, there seem to be various open concerted efforts from the government agencies to frustrate the development of Christianity in worship, education, literature, arts, even cultures. We cannot even put up crosses,” said Jambun.

Jambun, who is also a deputy chairman of the Sabah chapter of opposition State Reform Party (STAR), also raised the issue of the Alkitab and Bibles which are subjected to unnecessary scrutiny.

“Our Alkitab or Malay Bibles are still being subjected to unnecessary scrutiny by Muslim officers of the Home Ministry which is an intimidation because these Bibles are meant for Christians.

“Why must Muslim officers be scrunitising them (books)? Where is justice when you tax us to pay your officers to whack us ? It is absurd, ” said Jambun further demanding to know how many thousands of Alkitabs and other Christian books were still in the custody of the Home Ministry?

He said the civil service was also a poor reflection of the ‘fairness’ with Christian officers being sidelined in many departments.

“In many departments, there are less than five or even two percent of Christian staff, and this reflect the condition of fairness Najib is talking about.

“Listen to our grouses, walk your talk, and stop doing a public relations just to spruce up your dented image Mr Prime Minister.

“Sabah and Sarawakian Christians who are majority (in Borneo) demand better treatment,” Jambun said in a statement issued today.