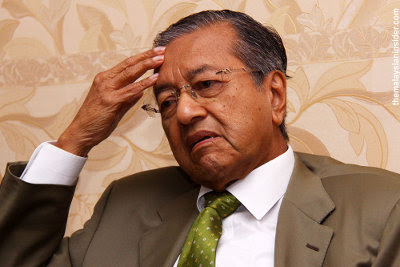 There has been nothing but an ominous silence from former Prime Minister Mahathir Mohamad to this reported Najib plan and with good reasons too.

His son, Mukhriz, is unlikely to make the grade given the father’s reported US$ 44 billion in assets and the flight of US$ 200 billion in dirty money last year. Like father, like son.

At least Najib has the “decency” to get outside expert help to screen his coalition’s candidates.

Mahathir, upon assuming power in 1981 as the Prime Minister, did no such thing. He decided, unilaterally, that his Bersih, Cekap dan Amanah (Clean, Efficient and Trustworthy) administration would not field undeserving candidates. Mahathir was judge, jury, and hangman in this case. Everyone knows that this was his way of purging BN of candidates put up by his predecessors and bringing in his faction members.

Many Umno and BN members who held party posts were not fielded as candidates in the General Election (GE) simply because they weren’t with him or he simply didn’t like their faces. To add insult to injury, they weren’t compensated with other government posts either because his aim was to finish them off politically and bury them for good. Mahathir, like Taib Mahmud of Sarawak, is notorious for having more than a mean, vicious, vindictive streak in him.

In a heads I win, tails you lose approach, Mahathir’s losing candidates in party elections were not only fielded as GE candidates but were rewarded with other government positions when they lost at the party and GE levels.

The rest is even more history.

Najib should know why he must get Mahathir and Company out of the 13th GE.

Mahathir’s regime was anything but clean, efficient and trustworthy as evident in, among others, Barry Wain’s book, “Malaysian Maverick – Mahathir Mohamad in Turbulent Times.”

If then Prime Minister Hussein Onn, Najib’s uncle, had not selected Mahathir as his Deputy Prime Minister, Malaysia would have had a different history. Hussein erroneously thought that since Mahathir was a lone ranger in politics and did not have any grassroots support, he would not be a challenge to him. Mahathir, however, being the wily Keralan that he was, managed to outmaneuver Hussein out of office in what’s seen today as virtually a coup d’etat.
Mahathir stabbed Hussein Onn in the back and betrayed Razak

This was how Mahathir repaid Abdul Razak, Najib’s father and Hussein’s brother-in-law, who brought him back to Umno after having being sacked by Tunku Abdul Rahman for being one of the three arch villains behind the May 13 race riots. The other two arch villains were Razak himself and then Selangor Menteri Besar Harun Idris who prevailed on the former to re-admit Mahathir into Umno.

The issue that Mahathir used against Hussein was the allegation that the latter’s wife was virtually running Petronas from her house. The Dap mysteriously received, now believed to be from Mahathir, documents in the post on the allegation and on Exxon allegedly stealing Malaysian oil on the high seas unknown to Petronas. Then Dap secretary-general Lim Kit Siang ended up in Court as a result of the documents as Exxon fought back with a legal suit.

The story, as it goes further, is that Mahathir had Hussein’s office completely cleared out when the Prime Minister was subsequently in London for medical attention.

He also reportedly spread rumours, in hinting at the allegations on Petronas/Exxon (Dap), that Hussein had a “terrible heart condition” and would be stepping down as Prime Minister upon his return “for health reasons”. Mahathir’s regime was a time of great rumour-mongering and all of which subsequently turned out to be true since they originated from the man himself.
It was Dap, albeit inadvertently, who helped put Mahathir in the Prime Minister’s chair.

Now, it’s Najib turn to settle scores on behalf of Hussein, his father and Tunku and embark on a real purge of Umno and BN members he shouldn’t field as candidates.

The primary purpose of the vetting exercise would no doubt be to eliminate those who are not in his camp. This would include Muhyiddin Yassin, his disloyal deputy who is in cahoots with Mahathir to undermine him. However, MACC or no MACC, it would be difficult for Najib to drop Muhyiddin and get away with it.

Muhyiddin should be the sole candidate from Mahathir camp

The Prime Minister can get poetic justice by fielding only Muhyiddin from the latter’s and Mahathir’s camp.

It would not be a good idea for Najib to pack the list of BN candidates with only his people. He should include some from the Tunku, Hussein, Abdullah Ahmad Badawi, Musa Hitam and Tengku Razaleigh Hamzah camps as well. This is the time for them to make a comeback and help neutralise Mahathir who never really had any grassroots support in Umno.

Mahathir survived by first pitting Musa Hitam and Tengku Razaleigh against each other not once but twice. He himself was returned unopposed. This is a feat he stage-managed.

If either Musa or Razaleigh had taken on Mahathir for the Umno Presidency then, they could have beaten him.

Mahathir used everyone and betrayed them

Mahathir then brought in veteran Ghaffar Baba, a strong grassroots man who had the backing of Malay teachers who then formed the bulk of the Umno membership, as his Deputy Prime Minister. It was Ghaffar who helped to pull in votes for Mahathir as Umno president in the face of a combined assault by Razaleigh and Musa for the Presidency and Deputy Presidency. Even then Mahathir would not have made it had he not received the backing of votes from 30 illegal branches created by him.

As history has recorded, Mahathir used Anwar Ibrahim to kill Ghaffar Baba. Subsequently, he had Anwar incarcerated on trumped up sodomy charges because the latter realised that the former was a grave danger to Umno, the Malays and the country.

Mahathir’s past will catch up with him in the present to haunt his future.

That would be evident when Najib announces the list of Umno and BN candidates for the 13th GE.

It’s highly unlikely that anyone dropped from the Mahathir and Muhyiddin camps would be fielded by Pakatan Rakyat (PR), the opposition alliance.

PR would only field candidates from the Tunku, Hussein, Badawi, Musa Hitam, Razaleigh and Najib camps who had expected to be fielded by BN and were not.
Posted by sabahkini.net at 18:09