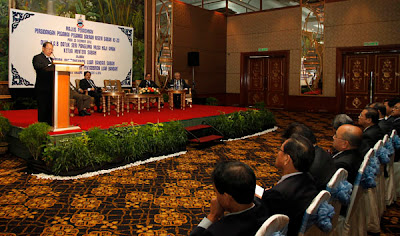 IN HIS KEYNOTE speech to the 20th District Officers' Conference read by Deputy Chief Minister and Minister of Infrastructure Development, the Chief Minister Datuk Seri Panglima Musa Aman reminded the state's district officers that they were the focal point of relations between the government and the people, and, as such, their role is to solve problems.

He said that on the whole he was satisfied with the performance of district officers in the state.

“You have acted professionally and responsibly in carrying out your duties, but there is still room for improvement. In particular, a more proactive and innovative approach in implementing, monitoring and assessing the Government’s programs and policies are needed,” he said.

Musa also told them that their job performance will come under increasing scrutiny of the people as the district officers  are their first contact with the government.

IMPERATIVE.....Close rapport between District Officers and the people is imperative.

“As the front liner of the government, district officers must interact with the people. You need to meet the people and not just sit in the office and monitor by remote control such as from a report,” he said.

“I expect district officers to constantly improve on the effectiveness of government’s delivery system, and do so with transparency, integrity and accountability,” he said.

On the broader aim of an effective administration, Ewon said that a clean, efficient and trustworthy civil service is crucial to the socio-economic development effort to eradicate poverty in the rural interior.

“Poverty must  be addressed in a comprehensive manner involving efforts to improve the people's livelihood as well as bringing modern amenities to the rural area,” he said.

Dr. Ewon said a district officers thus have a formidable task with almost two-thirds of the 3 million people living in 33 districts of different sizes and environmental conditions.

“The government has created a "focus group" to spearhead the fight against poverty, and the district officers are in the forefront to ensure the effectiveness of the government’s programs and policies,” he said.  (Insight Sabah)
Posted by sabahkini.net at 11:04