NO SWEAT FOR SABAH BN 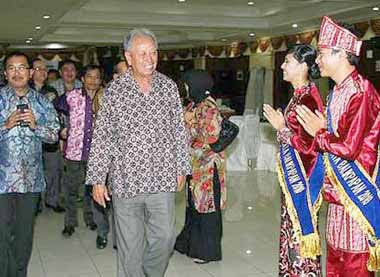 He said although there is a possibility that the BN might lose a few seats, especially in the town areas, he was pretty sure it would not be a problem for Musa to lead BN to victory.

"Sabah under Musa has done very well. It is a well managed State. This was confirmed by the Auditor-General's report that Sabah has the best accounting system in Malaysia.

"Musa has also jump-start the Sabah economy from the top to the bottom. This is almost completed.

"After this election Musa will jump-start the economy from the bottom (rural areas) if the Federal Government adopt the policy to abolish all subsidies, education and medical fees and in return pay a cash allowance of RM300 to every person. This will immediately trigger the development of abandoned rural lands. It will also create hundreds of thousand jobs for Sabahans," he said.

According to Harris, under Musa the Sabah Government had improved the working of government agencies, which is now making money for the State Government.

It was reported that as of now the State Government has a cash reserve of over RM4 billion. "There is no other state in Malaysia that can match and has reserve nearer to Sabah figure," he said.

The former Berjaya supremo who is also known as Sabah's Father of Development said it was imperative for the BN to be returned to power at all cost.

The main reason was that Prime Minister and Chairman of BN, Datuk Seri Nazib Tun Abdul Razak, had promised and committed publicly that he will reform the government and Umno.

"Barisan Nasional has proved that it has leaders who can perform.

On the other hand the opposition grouping "Pakatan" has no real leaders who can assure a government.

"Therefore, changing form Barisan Nasional is just like the English saying jumping from the frying pan into the fire." Harris also claimed that there were changes in the people's perception of BN over the last three to six months.

He believed that Barisan would be returned with slightly more seats than the last General Election.

"With another five years there is ample time for Najib to reform both the government and Umno. With the plan to reform, it will give time to Najib to jump-start the economy from the bottom.

"This means that everybody - the rural people will be given opportunities to improve and sustain their economy forever," he said, adding that the Federal and State Governments have been concentrating on the nation's economy by establishing infrastructures all over the country, including education and health.

These infrastructures, according to him, would be able to assist in the process of jump-starting the economy from the bottom.

Harris explained that from the bottom here meant the "kampung" (villages).

He stressed that well-planned programmes for the cultivation of both cash and permanent crops have to be introduced in the rural areas.

This, by itself, will create employment which is badly needed for the locals apart from reducing import of agricultural products and creating cash flow in the small townships or districts.

Harris also suggested that the Government look seriously into its policy of subsidising from petroleum products, food and services.

He claimed that this was wrong and would eventually create an artificial sense that the living standard and cost of living in Malaysia is cheaper and the people may take it for granted that the subsidy would last forever.

"Another reason is that the subsidy does not benefit everyone.

It should be abolished completely. Also needing to be abolished is the education and medical Fees and, in return, the government will have to pay a monthly cash of RM300 per month to everybody for 12 months only.

"The payment of RM2 billions a month is cheaper than the subsidy and easier to administer as well as not prone to abuse. It will also create awareness among the rural people to be self-sufficient in at least agricultural products and cultivate their empty land.

"By abolishing the subsidies and replacing it with the payment of RM300, it will have great impact on Malaysia's economy as well as creating millions of self-employment," he said.

Towards this end, Harris called on the people to return Barisan Nasional to power as voting for the opposition (Pakatan) would bring disaster to Sabah in particular and Malaysia in general.

He reminded Sabahans that when the voters voted for opposition in 1985 which governed Sabah from 1985 till 1993, Sabah was down in all fields.

The people lost their 15 acres of agricultural land, they lost Yayasan Sabah shares that were given by the Usno Government, Sabah lost 90 per cent of its open spaces, children playground in the towns, many government properties were sold for a song and there were many others, he said.

"This is conclusive proof from the people to "tukar baju baru" (changing new clothes). Instead the "baru" (new government) took Sabahans back to the back seat in Malaysia," he said.

He claimed that the State Government from 1985 to 1993 was the worst in the economic development as well as taking state assets like hot cakes.

Besides this, he said the opposition also has no credible leaders and that based on its leaders' statements from time to time, they looked like racial parties.

"They claimed unimaginable figures about foreigners coming to Sabah and were accorded citizenships.

Just to quote two statements, one made by Dr Chong Eng Leong (PKR Sabah Bureau on migrants and election reform chief) on claims that hundreds of thousands of illegals were registered as voters.

"Secondly, Datuk Lajim Ukin claimed that there were 40,000 registered for birth late registration in Semporna. This claim is baseless, if more than a 1,000 could more realistic.

"Compared this with published figure for Tenom, Sipitang and Keningau, which was more than 30,000.

Just by quoting these two opposition leaders which are not only not true, but also inviting racial tension between the Muslims against non-Muslims in Sabah," he said. (DE)