CANCER PATIENT TURNED AWAY BY 4 HOSPITALS 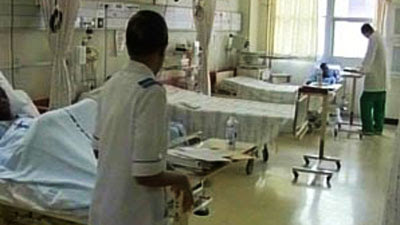 KOTA KINABALU : A patient suffering intermediate stage nasopharyngeal carcinoma (cancer of the nose) is feeling hopeless after having been turned away by at least four government hospitals in the country, including Queen Elizabeth Hospital (QEH).

Lau King Ngiuk, 71, and members of the family were informed by QEH doctors on Dec. 19 that she could not be treated with radiotherapy because the computer facility for radiotherapy planning was out of order.

However, QEH referred the patient to Hospital Kuala Lumpur for treatment with the reason that the hospital's one and only treatment planning system had broken down. She was recommended to undergo concurrent chemoradiotherapy.

But Lau's hopes were dashed when a doctor who was trying to make an appointment with Hospital Kuala Lumpur's (HKL) Oncology Department for her treatment informed the family on December 20 that there was no place for her at HKL, the reason being that three of the radiotherapy treatment machines were not functioning.

Lau, a mother of seven grown-up daughters, was dealt a third blow when the same doctor called up a second time, saying University Malaya Medical Centre (UMMC) in Petaling Jaya could also not accept her because it was full house.

Daily Express learnt that UMMC was also facing problems with the radiotherapy treatment machine. The last straw came when the Sarawak General Hospital in Kuching also declined to take her in for treatment.

Ngu Pei Lang, one of the daughters, confirmed this, saying the doctor personally conveyed the message to her through three phone-calls on the same day (Dec 20).

"I am very sad. I feel there is no hope for me. The cancer has now affected my lymph node, and I can't hear clearly in my left ear.

Why am I treated in this manner?

"How can the Government do this to me? It is as if Malaysians in Sabah are not humans," Lau said during a press conference at her residence at Taman Ramai, here, Saturday.

Earlier, Lau suspected something was amiss when there was bleeding each time she brushed her teeth. At the end of November this year, tumour tissue was biopsied from her nasopharynx, and by Dec. 3, she was diagnosed to have nasopharyngeal carcinoma, according to the Histopathology Report issued by QEH's Department of Pathology.

She also had a computerised tomography (CT) Scan at QEH on December 10 to confirm the diagnosis.

Lau, who wept throughout the press conference when relating her story, said "I am not just speaking for myself. I am voicing out the disappointment and frustration of all other cancer patients who had to be turned away. I don't mind going to the private hospital in Kuala Lumpur for treatment as long as the Government pays for the cost," she said.

Saying families should not accept the loss of loved ones as fate particularly in such circumstances, she hoped her children would continue the "fight" for better health services if she was no longer around.

"But then, do we have to wait for the worst to happen before things are put right?" she asked.

Chia praised Lau for her courage in standing up for her rights.

"Since the patient is in the intermediate stage and is very treatable (as told to the family by the doctors treating her), her case must be treated with urgency without further delay. Much time has been wasted."

Given the backlog of treatment and understandably long waiting-list as a result of the breakdown, she stressed that the State Health Department must act immediately to send affected patients to hospitals outside Sabah, including private medical centres, for the necessary treatment.

"How long more do you want them to wait? Are you going to ask them for come back in three months' time or six months' time?

By that time, you may not see them again.

Chia said it is incredible that Sabah, a one-time richest State, has only one radiotherapy treatment machine, and one computer facility for radiotherapy planning versus a population of 3.28 million.

"Why do we have to come to a critical stage where cancer patients are left in the lurch all because of poor planning, lack of foresight and absence of monitoring in the corridors of power?