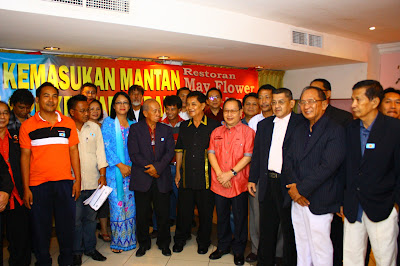 In welcoming their entry, Sabah STAR Chairman, Datuk Dr. Jeffrey Kitingan, said that the members of SPF were very disappointed for having been played out to the point that they lost their political platform when it was taken over by other people.  SPF was somehow taken over by a Sarawak group and its name was changed to Sarawak Workers’ Party.

“Now that we are about to face the 13th general election which is expected to be held anytime soon, we warmly welcome the entry of the former leaders and members of SPF,” Jeffrey said. “We pledge that they will be given the opportunity to be at the forefront of STAR’s struggle.

We call upon them to consider STAR as their new home where they will be with the other members as one family to forge ahead with the Borneo Agenda for the future of Sabah.”

Joseph Lusin, speaking for the group, told that SPF had 37,000 members throughout the state and they had identified 18,400 who will be following their step to join STAR.

Jeffrey commended the group for having taken the bold step by joining STAR and continue their political struggle to champion Sabah’s rights under STAR party.

“Their joining STAR has many positive implications” he said. “They first of all are saying to the people of Sabah and other local political parties that they have to unite in order to build up our strength to demand for the rights of Sabah.

“They appreciate that Sabah is our country and together we will march forward to face the various problems and challenges.   Sabah has lost its autonomy and independence, continues to lose its natural resources which are being siphoned out of Sabah, totalling RM24.7 billion in 2012 alone.  Our revenue from petrol was RM18 billion last year but we were left with only RM4 billion.

“What a tragedy to know that Sabah is so rich but the people are so poor. The news two days ago, in which there was an announcement that Sabah’s poverty had  suddenly been reduced but strangely the people don’t feel any of it.

"They keep losing the right to their lands and deprived of the NCR to the point that they have to collect money and go up and down the courts to fight for their rights just because they are living in the forest reserves, but they have been in the areas before the areas were converted into forest reserves.

“We also seem to have no more security as a state in the federation although we formed Malaysia together with the assurance of military security.   Now Sabah is no longer safe with the intrusion of the army of the Sultan of Sulu in Lahad Datu.

“How they managed to enter Sabah is a real puzzle, because where were the navy and marine police, the intelligence units and the other security forces?  Today, the threat on our security is not just physical but also in politics where we are also no longer safe with the illegal immigrants who have been given ICs and the right to vote.

“If the federal government cannot guarantee us security, we the citizens of Sabah need to do something to ensure the security of Sabah. One important idea espoused by STAR is the establishment of the Sabah Homeland Security, Immigration and Registration when we come to power,” he said.

“Sabah is ours, our future is in our hands and we cannot depend on outsiders nor to Sabahans who have become stooges and proxies of outsiders,” he said. (STAR Media)
Posted by sabahkini.net at 21:55