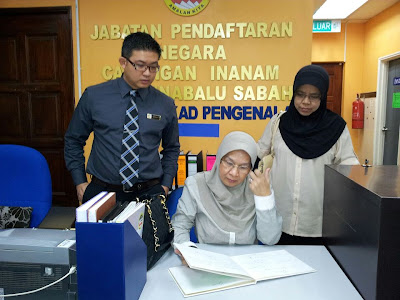 KOTA KINABALU : The process of registering new names, deleting dead voters or changing any particulars of the registered voters are all done transparently in accordance with specific standard operating procedures (SOP) being used by the Election Commission (EC), according to its Chief Assistant Secretary of Information Technology, Shafie Sajat.

Testifying at a hearing before the Commission of Inquiry on Illegal Immigrants in Sabah yesterday, he said any changes made to the electoral roll would have to go through several processes before they could be finalized and approved.

He said the EC has eight different SOPs used for registering new voters, which they utilized based on the type of voter applications, namely civilians, policemen, military members and civilians residing outside of Sabah.

Every SOP requires each new application to be cross-checked with the National Registration Department (NRD) to verify the citizenship status, age and address of the applicant, he said.

Apart from the NRD, which serves as the main reference body, the EC also checks for the applicants’ particulars with the police and army (for police and military personnel) as well as other agencies such as the Public Services Department.

“All Malaysian citizens aged above 21 are eligible to register as voters and as far as the EC is concerned all the names that have been registered are all Malaysian citizens whose status was verified by the NRD,” he said, responding to a question from the conducting officer Manoj Kurup.

The EC also tried to keep the voter list as up to date as possible by periodically reviewing every name and the particulars with the NRD, to detect and record any changes such as in the event the voter has died or moved from his or her voting district.

However, changes or correction to any particulars such as the voting district can only be changed based on request from the voters themselves.

As for the names of individuals who have died or lost their citizenship status would be deleted after receiving confirmation from the NRD.

“There are several steps involved, first the NRD would provide us with a list of names (deceased or no longer Malaysian) every month and we will cross-checked the names with our database. If any of the names are in the system, they will be proposed to be deleted and after the approval has been acquired from the EC committee, the names will be published for two weeks in gazetted places such the district office.

“If no objections are received from any parties, the list would be submitted to the committee again to be finalized and then removed permanently from the system,” he explained.

Apart from receiving the list from the NRD, he said the EC would also send its own list of names to be checked and verified by the NRD whenever needed as well as to cross-check all the names in its database with the department annually.

The EC, he added, updates its database every quarter of the year by keying in the changes that have been finalized and approved by its committee, including correction of the address, IC number names etc and deleting the dead from the list.

Shafie said the last update he knew of was done in the second half of last year, where there were a total of 959,669 registered voters in Sabah.

He also provided the RCI with a detailed statistics of number of voters for each state and parliamentary constituencies in Sabah from 1996 until the present date.

He said details on number of voters for individual constituencies prior to 1996 were available.

Shafie was the third witness called yesterday and the 58th witness who appeared before the RCI so far. He will continue with his testimony when proceeding resumes today.

Earlier, chief assistant director of Information Technology Department of NRD, Laila Abdul Majid testified that over 2.5 million births have been registered in Sabah to date, including non-citizen children.

She also informed that 1,794,994 ICs had been issued to Malaysian citizens in Sabah since 1963, including over 66,000 given to foreigners whose citizenship applications had been approved.

To a question, she confirmed that over 22,000 Sabah-born Malaysians were now residing in Johor.
Posted by sabahkini.net at 17:42