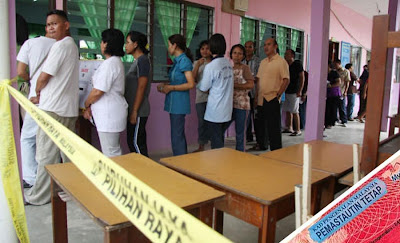 KOTA KINABALU: An Indian in the restaurant business who voted three times told the Royal Commission of Inquiry (RCI) hearing on Saturday that his name has been withdrawn from the electoral roll.

Omar Mohammad Subair, 57, said he registered himself as a voter with the Election Commission using a temporary identification receipt for the permanent resident identity card.

Omar earlier said his father was an Indian national married to a local Brunei woman and that he was born in Kg Bansau, Sipitang, but did not register his birth at the National Registration Department as his father had brought him to India when he was about six years old.

He claimed he returned to Sabah in 1976 after his father died.

Omar told the RCI that he obtained a Red Identity Card - Permanent Resident on Oct 9,1985 and confirmed that his application for the Red IC in 1985 used a Native Court statutory declaration, which stated that he was the holder of the orange identity card.

However, conducting officer Jamil Aripin told him that the orange IC actually referred to another person by the name of Salim Awang Besar as confirmed by the NRD on Feb. 21, 2013.

Jamil pointed out that Omar had failed to change his red IC to a blue IC as the NRD had found that the latter had used a fake statutory declaration to support his red IC application.

Omar said he was illiterate and that another person had helped him with the statutory declaration.

Omar replied he did not know about that because the document was filled by his village chief, one Sailin Haji Lamat, who had known him for 20 years.

Omar also said he did not know when and how he obtained the orange IC as a friend of his father gave it to him and that he kept the document until it was destroyed when his house was razed sometime ago.

To a question by Shim on how Omar had apparently cast votes, Jamil said the Election Commission registered voters based on the 12 digits on their identification documents.

Jamil, however, said with Omar's name being withdrawn from the electoral roll since the 2008 general election, it showed that there was improvement on the Election Commission side.

Testifying further as 61st witness, Omar also said tried to change his Red IC to a Blue IC in 1991 after getting his late birth certificate but failed and had tried to apply for it three times but to not avail.

To a question Omar said he had been using the temporary identification receipt for 14 years until he obtained his red permanent resident IC.

A few Pakistani and Indian immigrants testified last month about obtaining blue ICs - either from runners or from the NRD directly - within just a few years of arriving in Sabah without producing birth certificates.

They have also said that they registered as voters soon after receiving the blue ICs and voted in elections.

An Indonesian immigrant testified last month that a Tawau Native Court official had given him a blue IC in 1979, after arriving in Sabah in 1973, to vote for the ruling party.

But several PBS assemblymen defected to Barisan Nasional (BN) shortly after, causing the collapse of the PBS government.

Tun Dr Mahathir Mohamad, Malaysia's longest-serving prime minister who was in power from 1981 to 2003, has been accused of spearheading the so-called "Project IC", in which citizenship was allegedly given to immigrants for their votes.

But former Sabah Chief Minister Tan Sri Harris Salleh, who administered the state from 1976 to 1985, has denied at the RCI of the existence of "Project IC".

Dr Mahathir told a press conference last month that foreigners in Sabah had indeed received citizenship, but stressed that it was "within the law".

The inquiry before a five-member panel led by former Chief Judge of Sabah and Sarawak Tan Sri Steve Shim Lip Kiong resumes on March 5. (DE)
Posted by sabahkini.net at 23:03