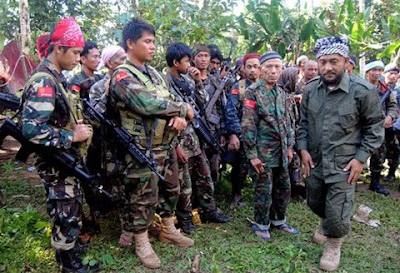 THE INTRUSION of the group of Sulu armed personnel into the FELDA oil palm plantation had created public interest, doubts, fear and many questions have yet to be answered. Until today we see the whole situation is unclear and the news were blocked and censored. This gave rise to a lot of speculation and guessing on what is actually happening in Lahad Datu.

The KK MP Hiew King Cheu was on site in Lahad Datu and went near to the area where the incident had occurred. The place looked peaceful and quiet, and the people went on with their usual daily activities. This is just the reverse from the news as reported that looks hectic and as if an emergency state is occurring there.

There were all types of rumors and unconfirmed news flying around, but how true is it? The official news media owned and/or controlled by the BN government had not reported any details but only carried the news on ‘so and so’ were there trying to do something.

Is it for publicity or just to show to the public they are doing something? In fact it is true enough that the people in Lahad Datu and Sabah are blaming the government for their ineffective way on handling the situation.

The question that the MP Hiew wants to ask is why this big group so called foreign militants with heavy fire arms is not being apprehended immediately but allowed to stay back for talks and to spell out their demands?

The various state and federal ministers come and go, and what have they achieved so far? It is more than two weeks now, and how long will the “standoff and the surround action” have to continue?

The news report also mentioned that some people in the group are Mycard holders, and that means they are Malaysian. The Malaysian laws stated that anyone in possession of fire arm illegally will face death sentence.

Thus, why they were allowed to stay on without action taken? Are they above the law or the government is frightened of them? Why can these militants “walk in” as they like, or even come into our soil openly in speed boats?

According to the people in Lahad Datu, the usual passenger number on these speed boats smuggling people in are normally not more than 30, if the report is correct that around 150 militants had landed, that means there were at least 5 speed boats that had come in to do the drop off.

How come our military forces and the police didn’t detect them? The people were saying that these people were in Sabah already sometime back. That is why there are hundred of thousands such people in Sabah and even holding Malaysian MyCards.

What ever it is we hope the government will act soon to eliminate the problem and to get it over soonest possible. We cannot simply be threatened and forced to accept unreasonable demands, especially on demanding land to be given to them as reported.

This is reflecting on how ineffective and inefficient the government dealing and handling the incident. The BN is condemning the opposition making unjust statements towards the incident, and in fact the BN government should answer the doubts of the people first.