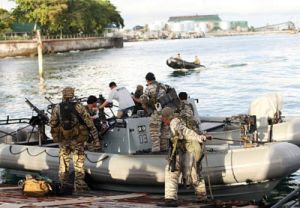 PREVENT .....The navy says this is to prevent more followers of the Sultan of Sulu entering Sabah.

MANILA: The Philippine Navy has sealed off the so-called southern backdoor to prevent the followers of the Sultan of Sulu province from traveling to Sabah, where a standoff between the sultanate’s followers and Malaysian security authorities persists.

The naval blockade was one of the measures taken by the Philippine government to prevent the escalation of the already tense situation, meant to ease the tension in and around Lahad Datu, where hundreds of Filipinos were holed up.

Lt. Commander Gregory Gerald Favic, Navy spokesman, on Thursday, said that six ships and an islander plane have been patrolling the Sulu Sea after Malaysian authorities reported the presence of loyal supporters of the sultanate. The group is headed by Raja Muda Azzimudie Kiram, a brother of Sultan Jamalul Kiram 3rd of Sulu.

The Manila Times reports the Navy patrol team is keeping a close watch on the vicinity of the provinces of Sulu, Tawi-Tawi and Basilan, home provinces of Kiram’s mostly Tausog warriors.

The naval patrol, he said, is for “security and stability of the situation.”

“We are avoiding the escalation of the issue,” the Navy spokesman added.

Favic clarified that the Navy’s patrol and reconnaissance mission on the vast Sulu Sea was not requested by Malaysia. He added though that the Philippine Navy is ready to conduct joint maritime patrol operations with the Malaysian Navy within the disputed area.

The Sulu Sea is a large body of water in the southwestern part of the country.

Favic said that no one has been arrested trying to cross the southern backdoor going to Sabah so far.

Heirs of the Sultan of Sulu said that their followers will stay put in Sabah, which they claim as theirs. The Filipinos are staying in the village of Tanduao, surrounded by Malaysian forces.

Emissaries of the Philippine government continue to negotiate with the leaders of hundreds of members of the sultanate of Sulu, who rejected Malaysian demands to return to the Philippines.

Government sources said that there is a plan to fly a Philippine Air Force C-130 transport plane to Sabah, or a naval boat to fetch Azzimudie’s group and bring them back home.

But whether such plans will be carried out “depends on the situation on the ground,” a source, who is privy to the negotiations with the sultanate leaders said.

Two weeks into the standoff, Malaysian officials are now calling for a drastic action against the sultanate’s followers.

Sabah’s Daily Express quoted Home Minister Datuk Seri Hishammuddin Hussein as saying that there will be no compromise on the rights and safety of its people in resolving the intrusion of the Filipinos, some of them armed.

“Since they had guns, it is important our action does not lead to bloodshed,” he said.

Malaysian security forces have surrounded the village, where the sultanate members are seeking refuge.

“The issue is not political, not racial, no connection with the stand on sovereignty but in our context this is our land and this is something that can jeopardize the nation’s security. This is why we are trying to handle wisely without bloodshed or loss of lives in our land,” he said.

He said that Malaysia is working closely with the Philippines to resolve the standoff. (Agencies)
Posted by sabahkini.net at 13:16