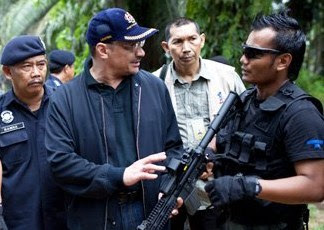 KLUANG: The Home Ministry would leave it to Wisma Putra on the request made by the Philippines on extending the deadline for the Sulu armed group to leave Kampung Tanduo.

Home Ministry Datuk Seri Hishammuddin Tun Hussein said he was notified about the matter from the Foreign Affairs Minister Datuk Seri Anifah Aman on the request from his Philippines counterpart.

He, however, stressed that the Ministry would leave it to the police to conduct an operation to end the standoff with the armed group.

"The country's sovereignty and the pride of the people of Sabah must not be taken for granted," he said. Philippines Foreign Minister Albert del Rasario said he had contacted his Malaysian counterpart requesting that the Friday deadline for the Sulu Sultan followers be extended till Tuesday.

He said the Philippines authorities were trying to persuade the followers of Sultan Jamalul Kiram holding up in Tandau for two-weeks to leave Sabah.

"We expect our request to be endorsed as work is in progress on urging the Kiram family to work on a peaceful withdrawal," he was quoted as telling the media in Manila.

He said that the Malaysian authorities had assured Manila they would not use force on the Sulu group if they left Sabah peacefully.

Malaysian security forces have encircled the Sulu group, comprising more than 100 men and led by the brother of Jamalul, and are waiting for orders to move in to deport them back to the Philippines.

The group, however, has so far refused to budge from the seaside village of Tanduo about 165km from Sabah's east coast town that straddles close to the sea borders of the Philippines.
Posted by sabahkini.net at 18:28