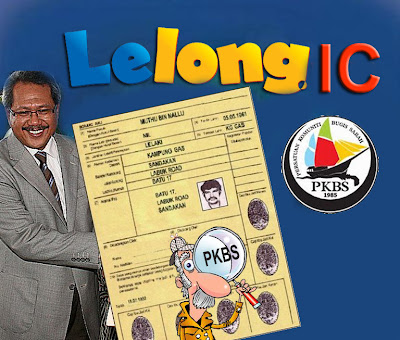 KOTA KINABALU : The Sabah Bugis Community Association denied any involvement in the issuance of Malaysian identity cards (ICs) to foreigners who came to Sabah illegally.

Its President Datuk Osman bin Jamal said the association has also never created forms to assist them to apply for the ICs and become citizens.

Testifying as the 59th witness in the Royal Commission Inquiry (RCI) hearing, he said many allegations and claims were hurled at the association that was formerly known as Sabah Bugis Welfare Association in the newspapers, blogs and portals.

Conducting Officer Jamil Aripin asked the witness whether forms from the association had been abused to apply for ICs for the Bugis people.

"I had read about such allegations and we had seen the form that looked odd but in fact, the association never issued such forms.

"Our secretary has taken action and lodged a report at the Karamunsing police station here on the existence of the forms," he said, adding that only Malaysians are eligible to be members of the association and priority is given to Bugis.

On whether there are any association members involved in helping foreigners obtain identification documents like birth certificates and ICs, Osman said he read in the newspapers about a head of the Bugis Association in Tawau, Samsul Alang and its former president Pandy Bandu Pilow, who were involved in the issuance of ICs to foreigners.

He said both were detained under the Internal Security Act (ISA).

Osman reiterated that the forms were produced by the two concerned and not the association.

He said the association was also alleged to have planned for foreigners to get ICs for the Likas constituency, which was not true.

He lamented that the association was not given the right to be heard to answer that particular allegation at that time.

Jamil also asked if there has been any encroachment of land by foreigners to which the witness replied the department, in the event, would dispatch its enforcement to investigate such complaints and work together with local authorities to take action against the intruders, including demolishing illegal structures.

He said the department needs a court order to demolish any physical structure on land that was encroached by intruders.

To a question by a counsel holding a watching brief for the Sabah Law Association (SLA), Osman said the department does not process land applications based on the person's race as long as the applicants are Malaysians with IC code 12 for those born in Sabah and not 71 which indicates Malaysians born outside Sabah.

He said the department does not verify ICs and documents of the land applicants as it receives between 35,000 and 36,000 land applications in a year.

Unless there are complaints about the concerned land applicants, then investigation will be carried out to address the matter.

OSMAN said there were Bugis who possessed the Native Certificate produced prior to April 22, 1982 when the then Local Government and Housing Ministry froze the issuance of the document and that those produced after the period are not valid.

He said not only the Bugis with Native Certificates are facing problems with passing on their inheritance to their heirs but also the KadazanDusun and Sino Kadazans.

"We received many complaints from the KadazanDusun including Sino Kadazan where they could not transfer Native Title lands to their children who do not have Native Certificates.

"Hence, I think the time has come for the Government to re-look into the freeze on the Native Certificate," said Osman whose parents were from Sulawesi and came to Sabah to work in plantations in the 1950s and were offered citizenship by the ruling government following independence in 1963.

To a question on whether Bugis are recognised as natives of Sabah, Osman said the community comes under Section 2(1)(d) for Interpretation of Native of the Sabah Ordinance Cap 64.

He said the particular provision states that any person who is ordinarily resident in Sabah, is a member of a people indigenous to the Republic of Indonesia or the Sulu group of islanders in the Philippine Archipelago or the States of Malaya or the Republic of Singapore, has lived as and been a member of a native community for a continuous period of five years preceding the date of his claim to be a native, has borne a good character throughout the period and whose stay in Sabah is not limited under any of the provisions of the Immigration Act 1959/63.

Based on books written by various credible authors, Osman said the North Borneo Chartered Company had appointed a man from the Bugis community to be the headman of a village in Tawau and the community had developed Tawau in the 1880s.
Posted by sabahkini.net at 23:25