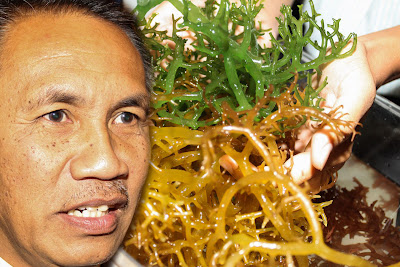 THE MALAYSIAN seaweed industry is poised to produce 150,000 metric tonnes of high quality processed seaweed worth RM 1.45 billion by the year 2020.

Sabah is Malaysia's only seaweed-producing state, and is expected to boost production to 35,000 tonnes this year from 23,940 tonnes in 2012 to meet surging global demand for the product.

Semporna is the country's top seaweed producing district under the National Key Economic Area(NKEA). In 2012, Sabah dominated the seaweed industry, earning RM 66 million. According to industry sources, at least 8,000 hectares (19,2000 acres ) has been dedicated to seaweed farming across the Sabah east coast, mostly of the Kappaphycus alverazii with Euchema spinosom species.

With the aim of maximising production, an additional 3,000 hectares has been zoned for development this year under the seaweed mini-estate project, which would bring to a total of 11,000 hectares zoned for seaweed cultivation.

In addition, another 40,000 hectares were also identified for the sector, which is expected to generate 150,000 tonnes of seaweed annually.

Suhaimi added that while seaweed farming is traditionally a highly labor-intensive economic activity, efforts are underway to introduce a more organised and integrated system which would make the industry more efficient in ensuring consistent industrial production of high quality seaweed produce.

Dr Suhaimi was speaking at the Bio-Borneo Conference 2013, which gathers experts from throughout the world to focus on biotechnology development and innovation potential of Sabah and Sarawak through Bioeconomy Transformation Program(BTP )projects envisioned by the government.

Acording to Suhaimi, the plan involves clustering farms as sea-weed producing estates and moving the industry towards downstream product development

UMS has modernised seaweed farming technology by introducing a more systematic model which incorporates the use of specially designed seaweed-based rope, application of seaweed fertilisers, and seeding pin tables.

All four innovative inventions were designed and developed by the team of researchers led by Prof Madya Dr. Suhaimi Mohd Yasir.

In terms of downstream product development, seaweeds are mostly cultivated for Carrageenan, a powdery seaweed extract which is highly valued in the food industry for its thickening, stabilizing and gelling properties.

As a food additive, research showed that carrageenan forms the firmest gels which combines mixed ingredients together whilst maintaining a smooth, consistent smooth texture.

It is commonly used in dairy foods to keep ice-creams and yoghurt creamy; meat products to restore juiciness and tenderness and a substitute for gelatin and pectin.

"The future of the industry is certain, fueled by rising demand for processed seaweed, due to its growing significance in various industries throughout the world" Dr. Suhaimi said.