VOTER-GET-VOTERS FOR A BETTER MALAYSIA 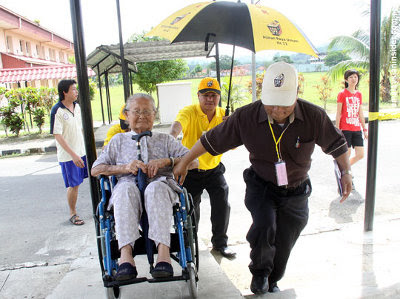 The foreign labour influx in Malaysia is a scam for politicians to rake it in and continue sending non-Malay job seekers in particular fleeing from Malaysia.

Malaysia also keeps 350, 000 Malaysians of ethnic Indian origin alone deliberately stateless in order to: (1) maintain a domestic reservoir of cheap labour in the twilight zone, (2) reduce the official number of Indians in the country, (3) keep them out of the electoral rolls; and (4) schools; and (5) enable the local authorities and police to prey on them, as on unlicensed Indian traders, for political reasons.

If a marriage certificate is obtained after the children are born, these children suffer the curse of statelessness. There are also thousands of stateless people among the Orang Asal in Malaysia. They are only given documents if they became Muslims.

This reduces the number of Orang Asal in the country while increasing the number of "Malays" on the electoral rolls. Already, non-Muslim Orang Asal with a bin or binte in their names are routinely classified as Muslim in their MyKads by the National Registration Department unless they can manage to get an impossible declaration from the Syariah Court that they are "no longer Muslims".

These people continue going to Church and eating pork. They can't get married in Church and undergo traditional wedding ceremonies in the villages under customary Adat. In the cases of marriages not legally registered or where the parents are not married, the children are not considered Malaysians.

Meanwhile, the NRD issued a statement on Thurs 21 Feb, 2013 that "Native Status is not for the Department to determine". What's there to determine if birth certificates and citizenship status are in order?

The Chief Secretary to the Government has also issued a policy circular -- administrative law -- in Nov 2010 clarifying that half-Native children can opt to be considered Natives (Orang Asal). All Orang Asal are Bumiputera (son of the soil) but not all Bumiputera are Orang Asal.

By right, all citizens by operation of law in Malaysia who are the issue of operation of law citizens should be considered Bumiputera. As late as the 1890s, 85 per cent of the Malay-speaking communities in Malaya were either immigrants or the descendants of recent immigrants, according to Professor William Roff in an Australian National University study, "the Origin of Malay Nationalism".

It's believed that many of these people were not required to determine their citizenship status, as in the case of the non-Malays, in the wake of the British departure in 1957. This includes the family of former Prime Minister Mahathir Mohamad.

The definition allowed the insertion of the "Special Position of Malays and Orang Asal" and "Legitimate Interests of non-Malays" Article 153 in the Constitution. The Article is being observed in the breach in all its deviations and distortions.

The Federation of Malaya is also masquerading as the Federation of Malaysia which, according to Putrajaya, will be 56 years old this year i.e. the years being calculated from 31 Aug, 1957 and not from 16 Sept, 1963 when Malaysia came into being through a joint decision by the Malayan and British Governments after a vote was taken in Singapore.

The MyKad system was in fact started in Malaya by the British during the communist terrorism years (1948 to 1960) to combat the menace and should be done away with. Probably, no other country in the world has a MyKad system.

The Pakatan Rakyat (PR) has no policies on all these issues created by the Evil of Government which affect the minorities, Sabah and Sarawak. Instead, they are harping on populist policies which not everybody buys because they "sound too good to be true".
Posted by sabahkini.net at 01:44