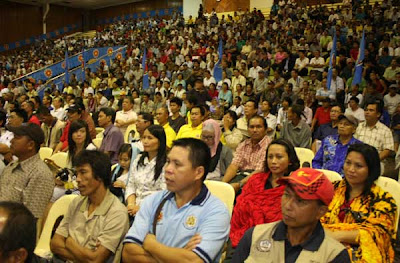 KOTA KINABALU : The State Reform Party (STAR) is launching yet a hotter slogan, "Ini Kali Lah, Kita Ambil Balik" (We Shall Take Back) following its popular "Ini Kali Lah" slogan which has now been copied by other opposition parties operating in Sabah.

STAR Sabah Operation Room Director, Dr Saiman Sandah, in a statement here today, said the slogan "Ini Kali Lah, Kita Ambil Balik" will further pave the way for STAR to lead in claiming and taking back what rightfully belonged to the state and Sabahans.

He said in fact the new slogan has already started to be used by STAR leaders at the party's functions including at a closed-door briefing for potential candidates at the Ming Garden Hotel here over the weekend.

Dr Sandah said STAR's popularity among the masses continues to grow ahead of the impending general election and it is no secret that whatever the party does now, other parties will pay attention too and in fact try to emulate it, sometimes copying en toto. "This slogan are meant for bona fide Sabahans but we hope it would not be hijacked by leaders of other parties this time around," he added.

STAR’s popular patriotic song Ini Kali Lah was officially launched with the “Ini Kali Lah” album on 20 April 2012 before a sold-out crowd at the KDCA Hall in Penampang.
Posted by sabahkini.net at 01:12