POLICE ESCORTS FOR VIPS POSE DANGER TO OTHERS 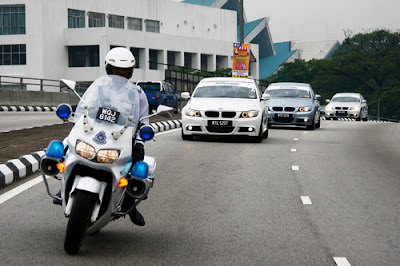 KOTA KINABALU : Police especially traffic police escorting VIPs on Sabah roads had been reminded to be more courteous to other road users and not bulldoze their way including pointing hands and fingers to ordinary Sabahan drivers on the road.

Social activist, Donny Yap, who is also director of consumer and community affairs of a UK-based NGO, Borneo Rights International (BRI), in making the reminder said he personally had a bad experience with these traffic police who came fast in siren telling other drivers in a harsh style to give way to VIP entourage.

"Yes they are VIPs... Prime Minister and Chief Minister, but the traffic police should not surprise and shock everyone by their ever pointing hands to other drivers telling them to go quickly to the side of the busy road so that a so-called VIPs could move smoothly ahead," he said in a statement here today.

Yapp said those security escorts should be taught a little bit of road etiquette and not take for granted that the other ordinary drivers have no feeling and that they are immune to insult.

"They think they are doing a great job, but actually many people disprove it. Why must Malaysia has this kind of traffic arrangement where VIP is given free way every way they go at the expense of majority drivers? Can't a VIP be normal road user? If they are so in a hurry why don't they just use helicopter instead?

"Must VIP's schedule always take precedent over other people's affairs including on the road? And worse there are so many VIPs in Malaysia," he said claiming that he was not alone over this matter.

He said he had friends also complaining verbally about it and commenting that it has gone a bit too much in Sabah in recent time.

Yapp said four days ago he was shocked when suddenly a police outrider came to the side of his moving car in the city moving his hands frantically as if telling him to quickly drive to the side or to the divider of the road to make way for a VIP car.

"I didn't know whether to suddenly stop or drive to the divider. I didn't know who was the VIP, he could be a Federal Minister i don't know but we should not have this style anymore where our safety is not the concern of the authority or the VIP. Maybe it is true, they are not concerned about us.

"Why must a Federal minister be given free way on Sabah roads?

"He or she must experience the same situation we face on the road. Only ambulance, the governor and Chief Minister should be given the VIP treatment and even then it must be in civilised way and not in the current style where as if nothing else matters but the VIP car," Yapp argued.

He wonder if other countries have the same style when it comes to VIP on the road. "But i have read somewhere that only a President or Prime Minister is given such treatment in many countries," he said adding that Malaysia is going insane with so many people being treated as VIPs lately.
Posted by sabahkini.net at 10:25