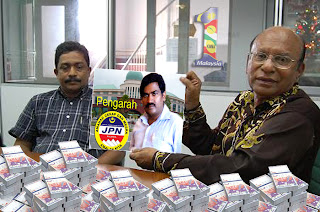 SABAH Indian Muslim Chambers of Commerce and Industries (DPPIMS) President, Datuk Baisul Khan denied he ever helped Indian immigrants to obtain Statutory Declarations by falsely stating that they were born in Sabah, in order to qualify for IC.

On allegations that many Indian immigrants in Sabah forged their identification through such SDs in order to obtain identification cards, he said he was not sure about this.

Baisul, who was born in India in 1945, said his parents being Malaysian brought him back to Malaysia in 1947. He admitted that members of the Chamber had identity cards but that he had no idea as to how they obtained them.

To a question from Conducting Officer, Jamil Aripin, Baisul who came to Sabah in 1970 as a teacher at St John's secondary school in Tuaran, said the members had valid identity cards.

"To become a member of our chamber, there are four criteria namely, they should be Malaysian, be 21 years and above, must have a trading licence and must be Malaysians of Indian origin.

"I am not concerned with the numbers on the members' identity card as long as they have a Malaysian identity card," he said, adding that there are currently 300 members.

Baisul who obtained Permanent Resident status in Sabah in 1976, six years after he applied for it, also denied allegations that he converted Hindus from India and through the chambers these members would be given identity cards.

He also said that the allegation made in Mutalib's M.D book 'IC Palsu' that he as a Chamber President had used the chambers as a platform for Indian immigrant recruits who then will be registered as members so that they can obtain Malaysian citizenship, was not true.

Baisul said he made a police report against these allegations and personally met with the State Police Commissioner.

According to Baisul, as president of the chambers he submits the names of members to the Registrar of Societies (ROS) every two years.

Baisul who is married to a local woman from Ranau, agreed with Jamil that there are many employers in Sabah hiring illegal immigrants because the organisations find it hard to get local workers.

He said the illegal immigrants are coming to Sabah because it is easy to cari makan (find job) as Sabah lacks labourers, especially in the plantation sector, because the locals are not interested to work in the plantations or restaurants.