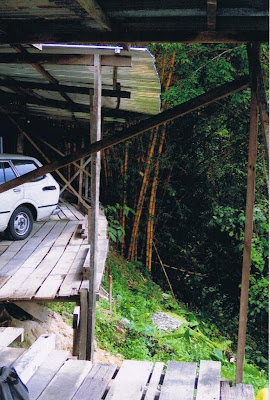 AN ARTICLE in the Daily Express on February 22, 2013 read “I am not stopping court order: Yee”. Deputy Chief Minister Datuk Dr Yee Moh Chai, a lawyer, said that he was not stopping the court order when, in fact, he was intervening in the demolition exercise of an illegal car shed which was supposed to be carried out on February 14, 2013.

The dispossession and removal order of a car shed illegally occupying a government road reserve on Signal Hill, Kota Kinabalu, could be intervene by a Deputy Chief Minister and Senior BN party leader is beyond comprehension.

How can the government operate and manage the complex Sabah affairs when a simple car shed issue with a court order and warrant cannot be easily executed?

Two years ago, the aggrieved parties and the landowner of a plot of land on the Signal Hill, filed a complaint to the DBKK and the Assistant Collector of Land Revenue for access to their land which is blocked by an illegal structures comprising of a car shed constructed on a road reserve with a few pieces of timber and a few corrugated zinc roofing sheets.

They were given a torturous period of reminders and run around between the authorities dragging their feet. Their complaint was finally acted upon by the Assistant Collector of Land Revenue and the State Government of Sabah, who through the State Attorney General, filed a case with the Magistrate Court at Kota Kinabalu under case BKI-89-15/10 2012.

The case was heard on November 27, 2012 and ruled in favor of the Lands & Survey Department and the State Government of Sabah. A Warrant was issued by Magistrate Court to the Police to dispossess the said reserve from the illegal occupants.

The Deputy Chief Minister Datuk Dr Yee Moh Chai in the February 22, 2013, Daily Express said that he intervened with the Magistrate Court order, and the demolition exercise was called off upon his request. Is this not a contempt of court for interference?

Yee, in the press release, explained the basis of his intervention as “it is still the Chinese New Year periods” as well as February 14 is “Valentine Day”, the action must be put off. And when pressured, he instead suggested that it was up to the relevant authorities to act.

The KK MP Hiew King Cheu commented that Yee, as a lawyer, needs to be reminded that he had in the first place intervened with the legal process when he acted against the relevant authorities who had wanted to act in due process.

This is unbecoming for a Deputy Chief Minister, a Senior BN party leader and a lawyer to protect some illegal car sheds blocking the access to the land of a legal landowner. How would Yee feel if someone put up a car shed in front of the access to his land/house?

Hiew said, a simple illegal car shed took years to act upon and even with a court order and warrant, and the issue could be superseded by “undue political interference”. For the relevant authorities to coordinate the next round of demolition, it will involve a few government departments and agencies meaning that it will be a waste of public funds and time.

If a simple car shed issue cannot be resolved quickly, what would the people of Sabah and Malaysia expect from the BN government? We have to use this case as precedence to decide whether we want the BN people to manage our country or not.
Posted by sabahkini.net at 00:05