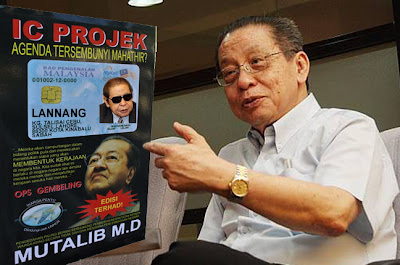 LIM KIT SIANG was making a big fuzz over the initial revelation that quite a sizeable number of Filipino residing in Sabah was given blue IC. Many parties was trying to blame it on Tun Dr Mahathir.

Tun Dr Mahathir rebutted to say that if he was bad for issuing IC to Filipinos, then Tunku Abdul Rahman is worse for issuing one million IC. It did not permanently silenced the opposition but after their lame rebuttals, it was sufficient to stop further attack on Dr Mahathir.

In Sabah, Dato Yong Teck Lee's SAPP are going on a "Sabah for Sabahan" mode like Dr Jeffrey Kitingan's STAR are making a big issue of the RCI finsings despite revealed information to dispell allegations of BN rigging the electoral roll with new citizens to win over Sabah from PBS in 1994.

The crux of the allegations should be directed at corrupt National Registration Department officials that was held under Internal Security Act (ISA). PBS did not lost from the alleged electoral roll change but PBS state assemblymen frogging over to Barisan Nasional as orchestrated by master frogger, Dato Seri Anwar Ibrahim.

RCI is due to be reconvene on Wednesday, February 27th. Will Teck Lee still be playing the RCI issue after this posting?

This blogger received an e-mail from his Sabah source that was closely following the RCI in Sabah. It contains some revealing information that was presented to the RCI. Surprisingly, it was not played up by the mainstream media in Sabah.

It only strengthen the suspicion [read past posting here] that Sabah media are not being professional in their reporting of the RCI and are trying to hold back information. One wonder who owns and work for the newspapers and radios in Sabah.

The information was a submission from the Ministry of Domestic Affair contains statistics of issued ICs for Sabah and number of according to country of origin and ethnicity from 1963-2012.

The first Table 1 below is the number of issued ICs, those still living and those died: 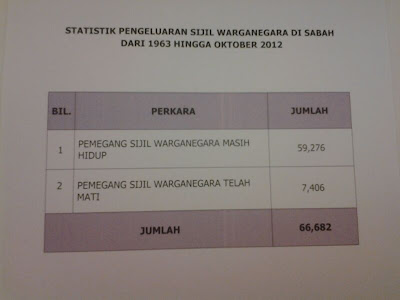 This differs vastly to previous claims of 73,000 to 200,000 of blue ICs issued in the tumultous years prior to and after 1994, the year PBS was ousted. Not to mention is the claim by a University Professor that Sabah population increased drastically at a certain years.

So does the mytical numbers been bandied around for real?

The second table provides information on the number of issued ICs in accordance to place of origin: 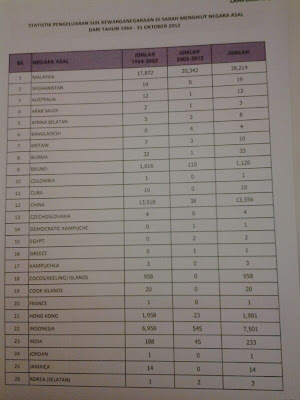 In this figure, it shows that the highest number of ICs are issue to immigrants who are based from Malaysia at 38,214. This are likely those immigrants already residing in Malaysia and most likely are stateless but was not issued ICs.

One could assume that the majority are Filipinos from Southern Phillipines. There is probably Chinese and other ethnics.

The highest other country of origin other than from within Malaysia are China at 13,556. This excludes those from Hong Kong at 1,981.

Neighbouring Indonesia and Brunei are only 7,501 and 1,126, respectively. India is only 233. Another country of origin that is likely to be Malays is Cocos Keeling island near Australia is 958.

This statistics is not complete because the total is only 64,889 but it only differs by about 2,000 from the total in Table 1.

Thus far it looks like the largest recipient of blue ICs from outside Malaysia is from China. Could this be the possible reason Dato Chong Kee Kiat fought tooth and nail against Dato Musa Aman with DAP, SAPP and others supporting the building of the the Ma Tzu stature in Kudat?

Perhaps, it is inconclusive to steer the wrath of the KDM and other Sabah ethnics towards Chong for bringing in immigrants from China. 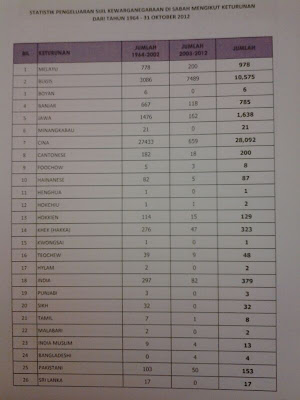 In this table, the number considered as Malays, which include Brunie Malays, Bugis, Banjar, Banjar, Jawa, and Minagkabau in 14,003.

The highest number among the ethnic Malays is the Bugis is 10,575.

This is interesting because there is a new PKR politician going around claiming Dato Najib brought in 300,000 of his Bugis clan from Sulawesi. Najib came to power in 2009 but the number of bugis given ICs for 2002-2012 is only 7,489.

That is the glaring weakness in most of PKR allegations. They are based on false fact.

The Chinese is still the highest number. The number of those categorised as Chinese is 28,092. To include all other Chinese sub-ethics, the numbers adds up to 28,893.

The Pakistanis that is allegedly being given ICs by the thousands by Dato Musa Aman whose got Pakistani, Kadazan and Malay bloods in only 153!

The total of 43,507 is still short by 23, 176. It is likely to be made out of more the long list of ethnic groups of Sabah and Sputhern Phillipines.

It is sufficient to say that the Chinese at 28,893 is the major beneficiary of the granting of citizenship program.

So ... what is Yong as the son of an immigrant rubber tapper, became Chief Minister at the recommendation of Anwar Ibrahim and had frogged with him twice.

As Chief Minister, he accumulated thousands and thousands of forest concessions and rubber pantation in Sandakan complaining about. Is the BN the punderer now? (Another Brick In The Wall)
Posted by sabahkini.net at 01:45