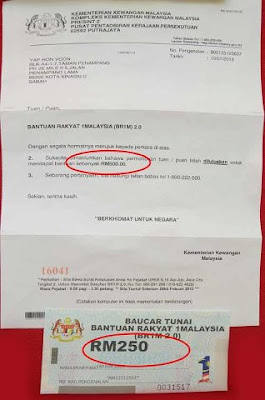 However to his surprise, instead of receiving RM500 like last year, Yap who works in the tourism sector only received RM250.

And he is sure that his was not an isolated case as he heard an elderly lady complaining about the same matter too.

Yap, who did not know who to turn to with regards to the problem yesterday, sought the assistance of Luyang assemblywoman Melanie Chia to get to the bottom of the matter.

"It is not about the money, I just do not want the same thing to happen to other people," Yap,23, said when met at Chia's office in Bornion Centre on Wednesday.

According to Yap, last year he received the RM500 financial assistance from the government as he is married.

This years, he received a letter from the Inland Revenue Board (IRB) stating that he has been approved to received another RM500 under the BR1M 2.0 payment.

"The letter stated that I was to go to the UPKR Api Api office in Asia City to collect the RM500 voucher which I did. As I was waiting in line, I heard an elderly woman in front of me ask the officer handing out the vouchers why she was given a RM250 (for single youths) instead of the RM500 approved to her.

"The officer replied that their job was only to distribute the vouchers and not to determine who gets what," Yap related, adding that when it was his turn, he simply signed for the voucher and left without looking at it.

Only later he discovered that it was also for RM250 and not the RM500 he was entitled to.

As he did not know who to contact about the matter, Yap said he decided to seek Chia's assistance.

"Personally, it's not about the money because it's free from the government; it is just that i am sure those in the predicament would also like to know who they should refer the matter to," he said.

After hearing Yap's complaint, Chia tried calling the toll free number on the letter given to Yap and also the IRB but to no avail.

"I regret that such a thing has happened because the RM3 billion allocated for BR1M 2.0 is not a small amount. I am however happy to note that people like Yap is raising the issue because the UPKP Api Api is not helpful at all.

"I have checked the BR1M 2.0 master list of recipients and round that Yap is supposed to received RM500, not Rm250. Therefore the relevant authorities must come up with a reasonable explanation as to how this could happen and if there are other people having the same problem.

Chia also contacted IRB here and was told that the department only looked into the approval of applications for the assistance.

She said the IRB officer also told here that the vouchers were distributed by the local authorities and this was confirmed by a City Hall officer when she called them later, Chia added.

"I am not satisfied with the responses given so far¡­ the government must show sincerity when giving out assistance like this. How can there be problems but no one knows who to refer to in order to get the mater solved?

"The government and the relevant authorities must tell the people to whom they can refer to when problems arise like what Yap is experiencing," she stressed.
Posted by sabahkini.net at 02:33