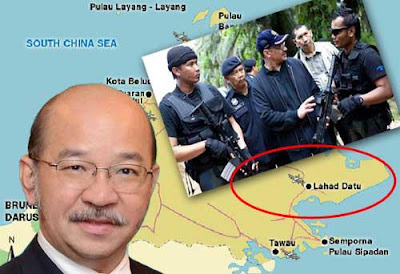 I had witnessed, as the then Chief Minister, a full scale military exercise conducted in 1997 by paratroopers and ground forces in the same locality at Tungku with the specific strategic objective to evict a foreign armed invasion.

That is why a few days ago, I said that the people should have every confidence in the security forces of Malaysia to eventually repel this intrusion.

But the lack of decisive action so far by the authorities has exposed the absence of political will at Putrajaya to defend Sabah and Malaysia's sovereignty. As a result, Malaysia is fast losing credibility in the eyes of the people and our international neighbours.

Whether the intruders are militants or Abu Sayyaf or some kind Royal outfit is irrelevant. The fact is that an organised armed group has openly challenged Malaysian sovereignty and declare war on the Yang Di Pertuan Agung and on Malaysia. These intruders are now saying "so what are you going to do about it?" Our armed force is being humiliated by a meagre force of 100 men just because the military's hands are tied by the politicians.

So much money have been spent on training, equipment, logistics and manpower to face this type of intrusion, and yet when it happened, Malaysia can do little about it.

If the intruders are seen to have got away with this blatant challenge to Malaysian sovereignty, then the Malaysian government must be ready to face 'copy cat' intrusions in the future.

On the longer term, the government, the armed forces, the police and other security agencies will lose moral and political authority over its own people.