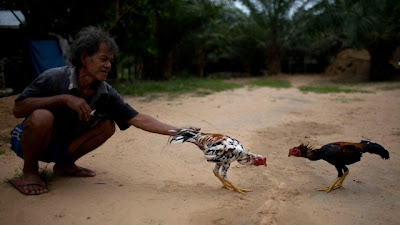 FILIPINOS .... A villager lets his cocks fight in Tanjung Labian in the area where the suspected Philippine militants are holding off near Lahad Datu on the Malaysian island of Borneo, on February 17, 2013.

MANILA : The Philippines should forget about its historical claim over Sabah while there is an ongoing standoff there and a separate territorial dispute with China, party-list representatives said on Tuesday, February 19.

Agham Rep Angelo Palmones went further and said that the current Sabah issue "should be settled through a diplomatic channel. Reviving a sleeping issue is like waking up a resting ghost.”

The southern Islamic sultanate of Sulu once controlled parts of Borneo, including the site of the current standoff between a group of Filipinos and Malaysian security forces.

The heirs of the sultan have been receiving a nominal yearly compensation package from Malaysia under a long-standing agreement for possession of Sabah, a claim that has not been actively pursued by the Philippines since 1964.

Deputy presidential spokesperson Abigail Valte who said Malacañang is hoping for a peaceful resolution of the standoff on Monday stressed that Sabah is not a priority for the Aquino administration.

"From what I understand, the claim is there and it hasn’t moved for quite some time. I also remember that the President did make mention of it (…) Let’s leave it at that for the moment," she said.

Department of Foreign Affairs (DFA) spokesman Raul Hernandez insisted that "there are no discussions with our claims in Sabah at this point in time."

The DFA on Monday urged followers of one of the self-proclaimed sultans of Sulu who crossed over to Sabah last week to assert territorial claims over the Malaysian state to leave and thus prevent bloodshed.

Sulu Rep Tupay Loong and said: “If they will leave the area, their claim will die a natural death. If they will stay put, it we’ll cause a high risk to their lives so that is their discretion."

The Philippines should carefully study the diplomatic implications of rekindling the now dormant Sabah claim, he added. (Rappler)
Posted by sabahkini.net at 14:16