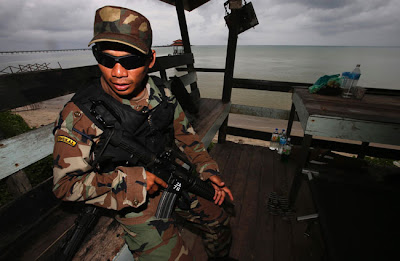 THE SOVEREIGNTY of Sabah, Lahad Datu or no Lahad Datu, rests with its people.  That should be the legitimate and logical response to what appears to be the problem, on the surface, in Lahad Datu and notwithstanding the fact that the Police have described the situation as complex, meaning fraught with untold difficulties and no doubt potentially grave and hidden dangers ahead.

This Sovereignty cannot be transferred to foreign powers and has never been transferred with or without the consent of the people at any point in history to Brunei, Sulu, Spain, Britain, Philippines or Malaysia. Sovereignty remained at all times with the people.

The Sovereignty factor is borne out by the fact that Indonesia under then President Sukarno made Ganyang Malaysia (Hang Malaysia) the thrust of his Konfrontasi Policy against Kuala Lumpur and London.

Sukarno rightly, in hindsight, described Malaysia, as a neo-colonialist plot hatched by London and Kuala Lumpur against the people of Sabah and Sarawak. The Indonesian president railed that Malaysia was a bad British idea in Borneo.

Manila concurred with Jakarta and not entirely because it backed the defunct Sulu Sultanate’s – without territory long before Spain in the Philippines -- designs over Sabah.

Indonesia was in turn vilified in the local and British media as a big crocodile, along with the Philippines, and just waiting to swallow Sarawak and Sabah respectively after the British leave.

Indonesia and the Philippines providentially became bogeymen, so-called security issues, for the Malayan and British Governments in Sabah and Sarawak.

There should be a debate on this and who has turned out to be the real big crocodile in the region.

I had intended to time a comment piece on the Sovereignty of Sabah after all sides had their say on the Lahad Datu standoff and the defunct Sulu Sultanate's claim to Sabah, more accurately the so-called northern and eastern parts. Both the Brunei and Sulu sultans never ventured in Borneo beyond the coasts for fear of the fierce head-hunters in the interior.

The intruders in Lahad Datu seem to be focussing on the eastern seaboard, Lahad Datu in particular, for a start.  The hidden dimension here is that the intruders may be standing up as much for their Muslim brethren in Sabah who are Malaysian citizens marginalised and disenfranchised by the continuing influx of other illegal immigrants.

Lahad Datu, as local myths go, was the first landing point in Sabah for the datus (traditional chieftains) from Sulu and they referred to the land they saw around them as Sabah (a kind of banana – Pisang Sabah - also found in the Philippines) since there were many Sabah plants where they landed. It’s noteworthy that the intruders involved in the on-going Lahad Datu standoff has chosen this region to make a statement.

The question of the defunct Sulu Sultanate having any private property rights to Sabah or any part of Sabah does not arise.

A distinction must be made between Sovereignty and property rights, whether public or private. They are not one and the same thing.

In England for example, the King no longer owns the entire land area of England as declared by William the Conqueror of Normandy, France, in 1066, after he killed English King Harold II at the Battle of Hastings and forced the local aristocracy to flee, many to Constantinople. Crown land is state land. State land cannot belong to a foreign power.

As Duke William II of Normandy he claimed, i.e. before 1066, that he had the right to the throne of England by consent of the dying previous English King, Edward the Confessor, and Harold II who succeeded the former as King. Harold II, as King, defeated Herald II of Norway who also claimed the throne of England. He left the south undefended and William walked to an easy victory there over the whole country as he busied himself with Herald II in the north of England.

My interest in penning this comment piece is not the Lahad Datu standoff per se, the Sulu claim to Sabah, the RCI or the forthcoming 13th General Election which may even be aborted in Sabah.

My interest is on the fact that the Lahad Datu standoff highlights the fact that no Referendum was held in Sabah on Malaysia, or for that matter in Sarawak, Malaya and Brunei, to provide for a legitimate transfer of sovereignty to Malaysia. Sovereignty, apart from private property rights in Sabah, is one of the main issues raised by the intruders involved in the Lahad Datu standoff.

Ironically, local Suluk and Bajau community leaders endorsed Malaysia in 1963, but now claim just preceding Lahad Datu albeit belatedly that they have been marginalised and disenfranchised ever since then (1963) but remained silent for this long for fear of the Orang Asal turning Sabah into a Christian state. They point to the fact that the Pala’u (Orang Laut) or Bajau Sea gypsies are still stateless.

Chinese community leaders were dead set against the new Federation which they viewed as an unnecessary compromise with their newly-achieved freedom.

Orang Asal leaders wanted Sabah to enjoy their independence for a time before looking at the idea of Malaysia again. They wanted further details on the new Federation.

Again, there should be a debate on this “Mother of All Issues” in Sabah and Borneo.

Instead, Putrajaya is continuing to harp on bringing development to Sabah and Sarawak, already the poorest Nations in Malaysia as declared by the World Bank in Kota Kinabalu in Dec 2010.

Pakatan Rakyat (PR), the Opposition Alliance, is banking on its Buku Jingga to add Sabah and Sarawak as well to its electoral booty.

Man does not live by bread alone!

A Constitution is not so much about law but is the ultimate political document reflecting history and Adat as well. However, anything deemed unconstitutional is unlawful and hence illegal.

This is why Putrajaya refers to Sabah and Sarawak as the 12th and 13th states.

This is why Putrajaya claims that Malaysia is 56 years old this year, the anniversary being calculated from the 31 Aug, 1957 "Independence" of Malaya and not from 16 Sept, 1963 when the Malayan and British Governments dragged Sabah and Sarawak into Malaysia with the “connivance”, for want of a better term, of the Singapore Government and the Brunei Government remaining silent.

Sabah and Sarawak did not become independent through Malaysia as the history books claim.

In Singapore, the people voted for independence through merger with Malaya via Malaysia. Sabah and Sarawak would be in Malaysia to facilitate the merger of Chinese-majority Singapore with non-Malay majority Malaya. The facilitation would be through adding their Orang Asal and Muslim populations to the Malay population in Malaya and Singapore.