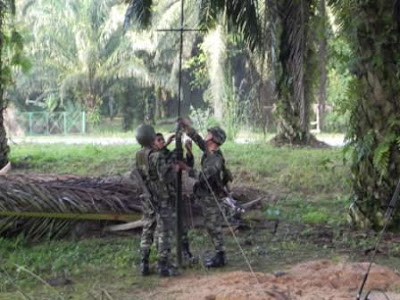 KOTA KINABALU: Philippines dailies are having a field day reporting on the ‘invasion’ Sabah’s east-coast town of Lahad Datu by men claiming to be members of the “Royal Sulu Sultanate army”.

One writer by the name of Ramon Tulfo of the Philippine Daily Inquirer recently wrote that the whole saga was a “karma” on Malaysia for its clandestine role in supporting the Muslim Sulu insurgence against Manila government in southern Mindanao in the 1970s and 1980s.

“When the (Philippines) government was fighting the MNLF (Moro National Liberation Front) in the 1970s through the 1980s, Malaysia was secretly supporting the rebellion in the South. Weapons coming from Libya and other Middle East countries passed through Malaysia on their way to the MNLF.

“Now, it seems the shoe is on the other foot. The law of karma is being played out,” wrote Tulfo.

The Sulu men called Tausugs entered Sabah’s coast about two weeks ago armed with automatic weapons, seeking Malaysian’s recognition to establish their own territory under the name of their Sulu Sultan Jamalul Kiram.

The Sultan himself, sometimes reportedly making statement from a hospital bed in Manila, said there are in fact 400 of his men in the state and that if they are armed, the arms were already in Sabah prior to their arrival, according to sources, made possible via a tourist boat!

Now if the Sultan’s version is to be the correct one, where are the remaining 300 or so Sulu army soldiers now? Does this give credence to earlier rumours that they had made it to Kota Kinabalu and even set a cell in Keningau?

Tulfo argued that Malaysia is in no-win situation from the current stand-off in Lahad Datu.

“If Malaysia is clumsy about handling the Sabah stand-off, it will have the same problem the Philippine government had when it fought a Muslim rebellion in the South in the 1970s up to the 1980s,” he warned.

The Philippine Daily Inquirer writer observed that “Malaysia is in a no-win situation as a result of the stand- off in Sabah. If it uses deadly force on a small group of armed Filipino Muslims now holed up in the village of Tanduo in Lahad Datu town in Sabah, members of the fiercest of Philippine Moro tribe, the Tausogs of Sulu and Tawi-Tawi, will retaliate.

“If, on the other hand, Malaysia compromises with the armed group purportedly belonging to the Sultanate of Sulu, it will be perceived as a weakling by its neighbours.

“Which will Malaysia choose, fighting a rebellion in the Sabah state or swallowing its pride and compromise with the Sultanate of Sulu?”

Tulfo said it would be better for Malaysia to be perceived as a weakling rather than have a bloody civil war in Sabah.

“Tausugs love to fight and look for reasons to pick a fight. It’s very easy for armed Tausugs to enter Sabah and wage a guerrilla war against the Malaysian government should hostilities break out between the Sultanate group and Malaysian police.

“If Malaysia assumes a violent stance against the Sulu Sultanate group, the Tausugs will have a reason to fight them,” he said adding that more from the southern Philippines would enter Sabah’s wide coastline to be with their brothers.

Malaysia, meanwhile, is on the verge of a general election and its security force, especially the police, are already gearing for a possible chaos or even violence by groups already alleging vote-rigging by the ruling the Umno-led Barisan Nasional coalition.

There is no record of the number of Filipinos, mostly Tausugs, in Sabah, but a former Philippine military intelligence official once estimated that up to a third of the population in the Malaysian state is Tausug.

“And to the Tausugs, the claim of the group purporting to represent the Sultanate of Sulu that Sabah belongs to the sultanate is legitimate,” further opined by Tulfo adding that the Sulu Sultanate, long dormant and somewhat forgotten because of the war waged by the Tausug-led MNLF against the government, is still revered by Moros in Sulu and Tawi-Tawi.

Tulfo said that the Tausugs respect the Sultan of Sulu in much the same way Malaysians pay homage to their royal family.

“If harm is done to Rajah Muda Agbimuddin Kiram, brother of Sultan Jamalul Kiram, who ordered the Muda Agbimuddin to enter Sabah, his fellow Tausugs in Sabah and in Sulu and Tawi-Tawi will take up arms against the Malaysian government.

“Filipino Muslims declare a “rido” or vendetta against people who harm their relatives. The “rido” has set off feuds between families or clans that last for decades,” he said.

Most of the Tausogs in Sabah have relatives in Sulu and Tawi-Tawi who are ready to take revenge if harm is done to Rajah Muda Agbimuddin Kiram and his armed followers in Lahad Datu town, he further wrote.

Tulfo also claimed that his sources within the Sulu fraternity told him that even before the landing of the about 200 men in Lahad Datu two weeks ago, the sultanate had already sent armed men in small groups to Sabah to escape notice of the authorities.

“The armed groups are being coddled by Tausugs in the Malaysian state. The sea border between Sabah and the Philippines is porous or easily penetrated. Most of the tens of thousands of Filipino illegal immigrants in Sabah entered through this porous border…” he said.

Meanwhile, Malaysian authorities who say they are in control of the tense stand-off within a palm oil plantation in Tandiau, Lahad Datu, have cordoned the whole perimeter and declared curfew around it, making it impossible to come near the site.

Reporters were barred from entering and those brave enough to seek their own way like the al-Jazeera investigative team who tried to reach the village by boat were detained for several hours for questioning.

Both Manila and Kuala Lumpur are still negotiating for a safe passage home for these Sulu armed men and women, and pressure is mounting on the Malaysian security forces to end the stand-off.

While they know it must end sooner or later, Sabahans are angry with the way the authorities are pussy-footing around the issue.

Opposition leaders from State Reform Party (STAR) and Sabah Progressive Party (SAPP) have both accused the Federal government of having failed to protect the safety and security of the state and Sabahans.
Posted by sabahkini.net at 08:13