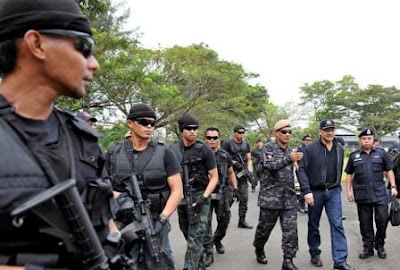 THE PRIME Minister and other relevant ministers must immediately answer for the current drama in Lahad Datu. It is totally unacceptable for the Barisan Nasional (BN) government to take a dilly-dally attitude following the intrusion of “armed men” from the Philippines.

The BN government’s “gentle approach” would certainly backfire because it looks like a tactical strategy to scare Sabahans into voting for them in the 13th General Election.

Under the Laws of Malaysia Act 37 Firearms (increased Penalties) Act 1971 – Incorporating all amendments up to 1 January 2006, “unlawful possession of firearms” in contravention of the Arms Act 1960 is punishable by death penalty, imprisonment for life, or 10 to 14 years imprisonment with whipping with not less than six strokes of the rattan depending on the case.

In the Lahad Datu case, as reported in the media, hundred of armed militants (with heavy automatic weapons such M14, M16, M203, etc) have encroached into the Sabah soil.

Is this not considered a very serious violation of Firearm Law of Malaysia? If so, why are these militants allowed to negotiate instead of being told to immediately drop their arms and surrender when they were already being surrounded?

This is a totally lame approach by the BN government to protect the national dignity and sovereignty. It just shows BN’s complete weakness in handling a serious emergency situation of an insurgence into our land. The action of the BN government should have been swift and decisive to demonstrate our security forces strength and power.

How can a small bunch of militants from a defunct ceremonial Sulu Sultanage bully our security forces into negotiating with them? The Sulu Sultanage cannot even claim any part of the Philippines as their ancestral kingdom separate from the Republic of the Philippines let alone have an army large enough to invade Sabah. Would they be powerful enough to stage a war to enforce their claim on Sabah?

The twist of this whole episode or fiasco is leaning towards widespread rumors that the BN government’s “no-bloodshed strategy” could be a tactic to counter the growing political uncertainties for BN in Sabah. The negotiation is going on for far too long and is looking “too fishy”.

The patience of local villagers barred from entering the cordoned-off areas to go in and out of their homes, to carry out their daily routine and economic activities are now running very thin. It has also not helped that the details of the so-called “negotiations” have been withheld from the public knowledge, with the mainstream media mainly controlled by the BN government “advised” to downplay the issue.

With not much news on the daily development, most Sabahans and Malaysians have been forced to search the internet online news and portals, tweets and social media for updates on the intrusions, leaving many people to spin their own theories and grapevines on the issues and the government’s mishandling of the situation because not even a single shot is fired.

This present incident is in contrast to the tragic incident in September 1985 when armed men dressed in military fatigues fired randomly at the public and killed 11 people and injured several others before robbing RM200,000 from a Standard Chartered Bank branch and Malaysia Airlines office in Lahad Datu.

They were very surprised to note that, according to the reporters who have been on site since the beginning of the incident and the villagers, nothing much had happened and the daily activities have been normal. So, what is the fuss all about?

If there are “intruders”, get them to surrender and lay down their “arms”. They should be arrested, put behind bars and charged under the Malaysian law for entering Malaysia with deadly weapons.

The government has spent billions of Ringgit to properly equip the Malaysian army, navy, air-force and police with the weapons, armored vehicles, helicopters, fighter planes, warships and submarines to protect our country. How is it that a few hundred militants from a neighboring country cannot be captured, arrested, deported or chased away immediately? Why have negotiations to be held and our government being held ransom?

It is a blatant display of a very weak and indecisive BN government. This government action further elaborates the issue of millions of illegal immigrants who have entered Sabah and Malaysia that were later instantly given Malaysian identity cards or MyKad, allowed to vote and given the right to own native land. There is no excuse at all and the handling style is totally unacceptable. In this instance, our government should have been very firm and authoritative.

In fact by now the Prime Minister should already have dissolved Parliament and give the people a chance to go to the polls and show their mandate on who should be the next national government at the 13th General Election – Barisan Nasional or Pakatan Rakyat.

The theory of an opportunistic tactic by BN in view of its sinking popularity in Sabah could be true. Sabah is BN “Fixed Deposit” and the “wind of change” seems to be blowing hard against BN in the “Land below the Wind”.

If this is true then the fixed deposit has been withdrawn or has expired. With it being withdrawn or expired, BN has to find a way to get the “Fixed Deposit” back. But how can BN deposit for Sabah when about one trillion Ringgit Malaysia had already been illegally siphoned out of Malaysia in the last 10 years according to Global Financial Integrity (GFI)?

Is this the end of the road for BN? Problems after problems are surfacing and unsolved in almost every thinkable area. More and more bones are falling off from the closet and all the rubbish swept under the carpet is beginning to build up into a mountain. Malaysia is becoming “famous” for the wrong reasons. The government’s approach to the latest “siege” is “stupid and unreasonable”.

The Prime Minister had just signed an election integrity pledge for a clean and fair election. The BN government had been well known for corrupt and unfair practices for many decades and the Royal Commission of Inquiry (RCI) hearings had reveal the blatant truth. How can the Prime Minister expect the Malaysians to believe his election integrity pledge?

In Sabah, in the past, it was “tukar baju” from UPKO to USNO, Berjaya, PBS and UMNO – all comrades in arms for BN. But now, it is - Tukar, Ubah, Ini Kali Lah!
Posted by sabahkini.net at 10:03