POWER CUTS ARE BACK IN LUYANG 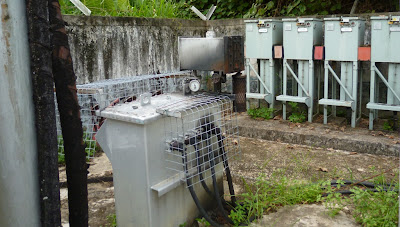 THE KK MP Hiew King Cheu received many complaints from the people saying that there are just too many power cuts recently in Luyang Kota Kinabalu – this week alone is already three times.

He had made many calls to SESB, and was given the details and reasons of the power cut. What is happening to Sabah Electricity Sdn Bhd (SESB)? SESB should put an end to these frequent power failures and cut which are affecting everybody in the area.

The SESB engineers should study the problems and immediately recommend the proper corrective actions and solve the problems once and for all.

It really looks like the demand for electricity in the city has increased tremendously and the current power distribution equipment and substations are not able to sustain the extra load, further more the power line, the transformers, and switch gears are too old which easily cause malfunction.

Judging from the problems in the past weeks or months, it seems the 11KV power line installed long time ago for the area will not be able to carry the current loading. It is now time to upgrade the system to 33KV to meet the demand that has been causing overloading and the frequent tripping of the system.

But if it is the nagging small problems of minor system or equipment problems or failures, there should sufficient maintenance to ensure that the problems would not recur. If it is an isolated case in many months, the people would not be duly concerned. But this is a situation where there are several long-hour power cuts in a month.

Power cuts have caused businesses to incur extra costs and damages to business and consumer appliances especially computers equipment. The KK MP Hiew King Cheu said with this kind of electrical failures Sabah has become a top consumer of electrical items such as the uninterruptible power supply unit (UPS), laptop batteries, chargers, motherboards, fans, and other electrical equipment, etc. Not to mention the downtime costs and the interruption to the people who are working on the computers or other businesses such as salons.

There is no excuse for frequent power failures because the government has allocated millions if not billions of Ringgit for electrification and maintenance services. How is it that we are still lacking in power supply and/or the system is constantly breaking down?

This is a long overdue and recurring problem that the government and SESB engineers have to quickly solve because it seems quite unique to Sabah. It is indeed like a sore thumb because Sarawak and Peninsula Malaysia are seldom having these problems.

Hiew said anyone can see that along the main road there are plenty of evident that the SESB power line and equipments are indeed needed upgrading and tidy up. There are power lines touching the trees, electric pole leaning over, near condemn transformers, broken switch gear etc.

These needed immediate attention and renewal, and there is no guarantee when these electrical installations will explode or seize functioning. The frequent tripping of the power supply system may due to these. It is the people’s hope that they could enjoy an undisrupted power supply at all times. SESB is not here to make tons of money but to provide the best service they can.
Posted by sabahkini.net at 11:15