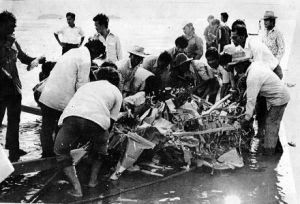 WRAPS.....After 37 years, the report on the air crash which took the lives of the Chief Minister and 10 others is still kept under wraps.

KOTA KINABALU: After 37 years, the investigative paper on the air crash which killed Fuad Stephens and 10 others is still a secret.
And one man who wants to change all that is Captain Joseph Lakai, a test pilot-turned-politician.
He has called on the government to make public the full report of the plane crash and put to rest once and for all insinuations that the deaths of Stephen and several members of his cabinet were deliberate.
On June 6, 1976 a small plane carrying the then chief minister Fuad Stephens and 10 others crashed as it was coming down for a landing. All on board were killed.

Stephens and his colleagues in the new state government had flown to Labuan to negotiate the extraction of Sabah’s oil and they had reportedly refused to sign away the state’s oil rights in return for a 5% royalty.

Days after their deaths, new Chief Minister Harris Salleh agreed to the deal offered by the federal government.

Lakai said the report was crucial as it would reveal the truth on what went wrong and could determine whether it was a human error, a technical fault, bad weather or other unexplained causes which had caused the crash.

Lakai, who once served in the Royal Malaysian Air Force as flight test engineer and test pilot, added that the report is necessary for the victims’ families to pursue insurance and negligent claims against the aircraft manufacturers and airlines.

“To keep the June 6, 1976 crash report continuously away from the public, especially after 37 years, is completely unacceptable.

“The circumstances surrounding the air crash and the secrecy of the report can give rise to suspicions and speculations.

“As a patriotic Sabahan, an aviation consultant and a mechanical engineer, I fully agree with SAPP’s [Sabah Progressive Party] efforts to uncover the truth behind the air crash by first getting the 1976 report released,” he said.

Speaking at a news conference organised by SAPP information chief Chong Pit Fah here, Lakai said he was made to understand that SAPP MP for Sepanggar, Eric Majimbun, had posed this question to the federal government in Parliament but received no reply.

Lakai said the official version behind the crash does not add up and the tragedy remains a mystery.

“Immediately after the crash there were allegations of foul play due to the political circumstances at the time. Many questions arose over whether the tragedy was the result of a mechanical problem or bomb or pilot error or problematic aircraft,” he said.

He said the Australian government sent a team of four investigators to assist in finding the cause of the accident. Preliminary investigations indicated overloading as a contributing factor.

However, the original report on the incident remains classified until today.

Lakai said the people of Sabah have a right to know why the 1976 report remains classified.
Posted by sabahkini.net at 00:47