ORANG ASAL, NATIVE AND BUMI ARE NOT THE SAME 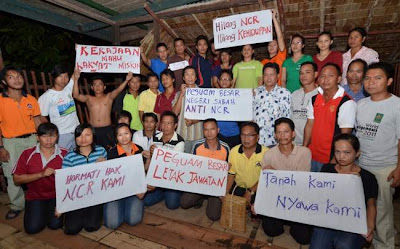 LETTER Reader Chong Tet Loi claims in “Never let extremists have their way” (Sunday Forum 24 Feb, 2013 Daily Express) that MANY (people?) were amused by my take in “Both These Sultans Never Owned Sabah” (Sunday Forum 17 Feb, 2013).

No doubt he conducted an instant Sabah-wide survey after my letter to conclude that 'MANY' were 'amused' by it and probably he would have liked to add that quite a few even died from laughter.

I don’t know Chong from Adam’s. I hope that he is not a coffeeshop lawyer. If he’s a lawyer, heaven forbid!

I don’t know either if Chong is smart. If he’s smart, he’s not too smart either.

No offence meant. Nothing personal. We all make mistakes. To err is human, to forgive is divine. Ignorance is bliss, a little knowledge is dangerous. That doesn’t prevent many people from ventilating their ignorance in public for MANY, as Chong pointed out, to be “amused”. If only these MANY would come forward and state their piece!

In fact, I readily 'concede' that I am one of those 'guilty' of routinely 'ventilating my ignorance in public', as the accusations go. In that sense, I am a glutton for punishment as well. Chong, if it’s any consolation, is in good company.

But if my ventilation of 'ignorance' remains unrebutted or unchallenged beyond a shadow of doubt, surely then it must enter the realms of being the Gospel Truth, for want of a better term.

The writer has accused me of a cardinal sin: writing to impress (show-off is the word he used), no doubt rather than writing to express.

This is really so ridiculous that it should not be dignified with any comment.

Is Chong trying to convince us that he’s a subject matter expert in the English language and things Borneon?

I am not like Terence Netto of malaysiakini, a self-appointed specialist in emptiness of thought, who in defending Anwar Ibrahim doesn’t know whether he’s coming or going. Netto can really say a lot without saying anything in particular.

Those who know me will testify that I am also not like Anwar Ibrahim the political chameleon, Netto’s hero, who unfortunately for us all wants to be our next Prime Minister, driven like Najib by the delusion that the post is his ancestral birth right.

Unlike Anwar, I always mean what I say and say what I mean. I never write to impress but only to express. I never use one word more, when one word less will do. Never a difficult word when there’s a simpler word for it.

Chong is also gravely mistaken when he claims, in a highly politicised and emotionally-charged take, that I harbour ill-will towards half-Natives and particularly Sinos.

Nothing could be further from the truth. What has ill-will, even if true, got to do with anything?

My purported ill-will alone will not be sufficient to deny the half-Natives their human rights. So, why bring up any purported ill-will to detract, disrupt and distract from the issue? Why not clarify and defend the Sino-Natives if I have infringed on any of their rights?

Inter-marriage, harmony, and goodwill, or the lack of it, is not the issue here either.

I reiterate my earlier statement, at the risk of being labelled an extremist, that many Sino-Natives in Sabah don’t have even a drop of Orang Asal or other Native blood in them.

Those who don’t believe this statement can just take a walk to the nearest Amanah Saham Bumiputera (ASB) counter where Chinese-looking “Sino-Natives” with Chinese names are made to run the gauntlet. We can hear them cursing and swearing in Chinese among themselves, much to the amusement of the others, as they are often made to wait for as long as three hours while checks are made into their background.

This matter can easily be settled, on a case-by-case basis, by Sino-Natives producing a DNA report. If no Dusunic, Murutic, Suluk or Bajau DNA, don’t claim to be Sino-Native in Sabah!

I was careful not to use the Sino-Native as an example in my Feb 17 take and instead referred to the Indo-Natives who are really very tiny in number in Sabah when compared with the former.

All I am saying is that one cannot be Chinese and Native in Sabah at the same time. Either one opts to be a Native or a Chinese. There are procedures for this and I have already spelt them out. If there do seem any contradictions between this take and my earlier one on Feb 17, consider this has the true and correct version.

If the long-suffering Sino-Natives want to stop being a political punching bag, they should not leave their fate entirely in the hands of their myopic leaders and self-appointed opinion leaders like Chong who keep elephant-sized egos as pets.

Since it doesn’t serve any purpose whatsoever, I have no similar DNA advice for the obviously just-arrived from India Tamil Muslims, for example, who queue up at the ASB counter proudly clutching their unit trust books.

The Constitution allows Indian Muslims in Malaysia to claim Malay, and by extension Bumiputera status, but does this privilege also extend to those who just got off the boat from Tamil Nadu or from elsewhere in the Indian sub-continent?

Why they are not made to run the gauntlet by ASB just like the Sino-Natives is a bit of a mystery?

The National Registration Department (NRD) in a recent statement in the local media clarified that they don’t decide on Native status. It’s right in a way. We should all re-read the Chief Secretary’s circular of Nov 2010 on the issue. The NRD, it must be noted, is a Federal Government Department, and is duty-bound to comply with any policy directive from the Chief Secretary.

The said circular does not refer to Natives but half-Bumiputera. Having said that, the proof of the pudding is in the eating.

The NRD, no doubt in its confusion, does not re-issue birth certificates to half-Bumiputera with the entry Bumiputera under race.

The only exception I know is a half-Orang Asal girl who was issued with a birth certificate which carried the term, “Bumiputera Sabah Bukan Islam” in the entry for race. That was two decades or more before the Chief Secretary’s said circular. This particular girl was even questioned recently on her race by a puzzled Immigration at the Kota Kinabalu International Airport. But that’s a different story.

In Sabah, the NRD will only enter Dusun, Murut etc or Suluk, Bajau etc when re-issuing birth certificates to half-Bumiputera. That’s getting into Orang Asal and other Native territory and clearly a contradiction in terms if the half-Bumiputera concerned is not at least partly of Orang Asal stock.

In Sarawak, the Immigration Department will enter Iban, Bidayuh, Melanau, and Orang Ulu for half Bumiputera in their passport details despite these applicants holding birth certificates without these classifications.

The NRD Sarawak routinely refers all applications from half-Bumiputera for re-issuance of birth certificates – as per the Chief Secretary’s policy circular  to the Native Court for a declaration. Here, no half-Orang Asal will be declared Orang Asal.

Let’s make a distinction between Orang Asal, Native and Bumiputera based on Adat, history and jurisprudence. Let’s not get into myths, fairy tales and bad political propaganda.

Orang Asal need not be defined by the Constitution or law – Acts, Enactments, and Ordinances, administrative but only by history and Adat.

That’s why the Orang Asal of Sabah refused to be entered and defined in the Native Interpretation Ordinance. They considered that the Supreme Insult.

There’s no need for DNA studies, notwithstanding my earlier take on DNA reports for Sino-Natives, since the entire population of Southeast Asia is descended from dark-skinned Dravidians (archaic whites) who made their way from South India along the Asian coast to South China and Taiwan and mated with the Mongolian (yellow-skinned by now after specialisation) tribes living there.

These Mongolian tribes were descended from one branch of the Dravidians who broke away from the main group in Afghanistan which entered the Indian sub-continent.

Orang Asal in Sabah refers only to the Dusunic including Kadazan or urban Dusun and Murutic groupings. These are the people to first settle down in the empty expanse of a geographically defined area – Sabah, Brunei, northern Sarawak, and the headwaters in Borneo where three nations meet – and did not leave remnants of their population outside this defined area, and if so, not in any great numbers.

Orang Asal means Original People or Indigenous – also in using the terms employed by the United Nations -- as in Adat and history.

Orang Asal also means Native but as the Native Interpretation Ordinance shows, the term also includes people who are clearly not Orang Asal. In short, all Orang Asal are Natives but not all Natives are Orang Asal.

In Sabah, the terms Orang Asal and other Natives should suffice but a further difficulty was introduced when Tunku Abdul Rahman in Malaya coined the term Bumiputera, a Sanskrit word meaning 'son of the soil'.

The reason for coming up with this term was because the Malay-speaking communities in Malaya - Bugis, Javanese, Minang, Acehnese, Arab Muslims, Indian Muslims etc – are not the Orang Asal of the peninsular. Neither are they considered Natives.

The Federal Constitution merely defines the term Malay. This definition is not ethnic but political, subsequently constitutional, and in essence denotes a Malay Nation in Malaysia without Territory.

Malaya and Malaysia, incidentally, are named after the Malay language which began as a dialect in Cambodia and was developed by the Hindus, later the Buddhists, to become the lingua franca of the Archipelago. The Hindus infused Sanskrit words into Malay and the Buddhists did the same with Pali (a Sanskrit dialect) terms.

With one stroke of the bureaucratic pen on Bumiputera, Tunku included the Malay-speaking communities in Malaya in the same category as the Orang Asal and other Natives in the country for the purpose of doling out Government aid to certain communities.

One could argue further that Bumiputera are not Natives and certainly not Orang Asal.

In that sense, the NRD is right when it said that it does not decide on Native status. The Chief Secretary’s circular merely refers to Bumiputera status. However, all Orang Asal are Native and Bumiputera while other Natives are Bumiputera but not Orang Asal.

The term Bumiputera does not exist in law or the Constitution despite what Chong claims about “Stephens and his half-Native company”.

I will rebut the rest of Chong’s take in his Feb 24 letter in a separate piece.

Again, if there do seem any contradictions between this take and my earlier one on Feb 17, consider this has the true and correct version.
Posted by sabahkini.net at 22:09