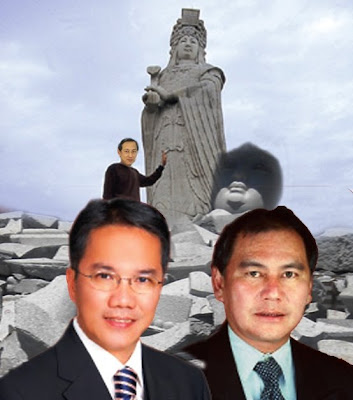 END....If rumours are any indication, the end is near for Liberal Democratic Party – Sabah BN's local Chinese arm.

Word is that Chong, along with two other eminent former state Barisan Nasional assemblymen, joined opposition PKR in a secret meeting with PKR supremo Anwar Ibrahim who was here last week.

Chong, who was once a federal minister, was also the former assemblyman for Tanjung Kapur.

According to insiders who claimed knowledge, all three met Anwar at a hotel here during his visit to Sabah on the eve of the Chinese New Year.

The sources claimed they handed in their application forms to Anwar at the meeting and that an announcement on it was being planned by the party’s headquarters possibly to coincide with the impending dissolution of Parliament that could be as early as Feb 22.

Efforts to reach Sabah PKR officials for confirmation were futile while texts sent to PKR leaders were ignored.

Meanwhile, it was learnt in Kota Belud that Gimpoton has been earmarked as potential PKR candidate for the Kota Belud parliamentary seat.

According to insiders, Ahmadshah could be a PKR candidate for one of the state seats in Keningau area, possibly Bingkor, which is also being eyed by State Reform Party (STAR) Sabah chairman, Jeffrey Kitingan.

Observers said that if the trio had indeed joined the opposition party, it would boost PKR’s image in the state.

It will also further stiffen the fight among the opposition political parties contesting in Sabah, notably between STAR, PKR and also SAPP (Sabah Progressive Party).

Chong has been at odds with the current Barisan Nasional state government over differences on issues close to his heart.

In fact, he resigned his deputy chief minister’s post not so long ago, citing his unhappiness with the way things were going on in the state administration.

Chong was especially disappointed at the way Chief Minister Musa Aman handled his “Mazu” statue project in his hometown of Kudat. He even sued Musa over the matter.

In Kota Belud, relatives of Gimpoton claimed that he was persuaded by his own conviction that it is time to change BN. He is known to have his own mind over Sabah politics and in the recent past he openly supported PKR candidate for Kadamaian, Lukia Indan, in 2008.

Ahmadshah, who is the youngest of the trio, is said to be making a comeback after the opposition made inroads into the vastly rural Keningau, where he comes from.

Efforts to reach the three for comments were unsuccessful. (FMT)