AKJAN'S ACTION A THREAT TO MALAYSIA 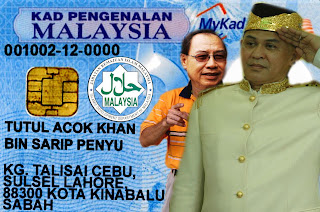 THE action by Datu Akjan Ali Muhammad to declare himself in Sabah as Sultan of Sulu brings a host of serious implication and potentially many repercussions on Malaysia's sovereignty.

"It clearly violates the immigration laws of Malaysia," the Chairman of the United Borneo Front (UBF) said. "If he calims to be the Sultan of Sulu, that clearly means he is no longer the a citizen of Malaysia. This is because Malaysia doesn't allow dual citizenship."

Jeffrey also pointed out that by declaring himself a Sulu Sultan, he is also defying the government of the Philippines which doesn't recognise anymore sultanate in Sulu. "If such is the case Akjan is a rebel who is taking refuge in Malaysia, and that means he is compromising the security of our country. And if he believes he is the Sultan of Sulu how come he is not in a palace in Sulu, and instead continue to make a living in Sabah?"

"And now that he is a Philippine citizen why doesn't the Malaysian government revoke his Malaysia citizenship?" Jeffrey asked. "And why is he still a member of Umno? I have also been informed that he is listed in Mutalib M.D.'s book IC Palsu as someone holding a fake IC. If that is true the case needs to be investigated."

As of the issue of police corruption which allows the easy entry of illegal immigrants for only RM350 each, Jeffrey fully supports the determination of the police to probe the matter. "However, because the matter is of grave importance to the nation's security and sovereignty, the government should be more serious about it and form a commission of inquiry to investigate fake ICs, the Project IC, and our border security system because it has come to a stage where people can easily come in and out of Sabah, and even declare themselves sultans within our borders."

"If the government continue to play deaf and blind, we may come to a point when action and regret will be too late," he cautioned.