LNG IS ONLY AN INTERIM SOLUTION 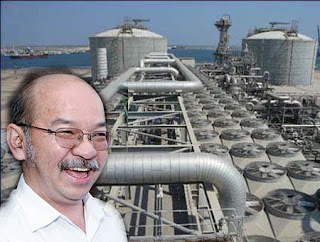 At the moment, our Sabah natural gas lands at Kimanis and is piped through a RM 1.6 billion, 500km pipeline all the way to Petronas’s LNG complex in Bintulu. One of the biggest in the world at 25 million tonnes per annum (mtpa) capacity, that complex exports LNG to Japan, Korea and China, three lucrative markets for Petronas.

Therefore, if our gas power plant in Sandakan has to rely on LNG from Bintulu, then Sabah will have to compete with foreign countries for the LNG. Obviously, prices and energy security will be uncertain. If Sabah Electricity Sdn. Bhd. pays less than the international market prices for LNG, then the disputes over ‘subsidies’ will arise, like the present irony whereby if the market prices for our own petroleum go up, then we end up paying more for the fuel. In fact, since we are the producer of petroleum and gas, when market prices go up, we should be making more profits instead of suffering from higher prices.

It is not as simple as what the Chief Minister has said that “Sarawak takes our gas and gives us their LNG”. This is because both the gas and LNG are not controlled by the state governments of Sabah or Sarawak but by Petronas which is a profit making giant that is a government within a government.

Hence, SAPP reiterates our view all along that a gas pipeline from Kimanis to Sandakan is the best long term solution. We reject the excuse that a Kimanis-Sandakan pipeline is costly because this Sandakan pipeline will cost much less that the pipeline to Bintulu. In the long run, natural gas will be cheaper, faster and more reliable that LNG. It is a gross irony that our natural gas is piped away to Bintulu only to be sold back as LNG to us.

BN leaders should be reminded that the BN government has guaranteed that Sabah will have all the natural gas that we need, and that only surplus gas will be piped to Bintulu. Even the pipeline to Bintulu was supposed to have provisions for Sabah’s own domestic needs. These were the guarantees given to Sabah in 2008 when the then Prime Minister’s (Datuk Seri Abdullah Badawi) reneged on his promise to scrap the Bintulu pipeline project.

Having lost 3 million acres of oil rich maritime territory in oil blocks L and M to Brunei recently, Sabah has every right to demand that we have all of our remaining natural gas for our own needs. Petronas, by the way, will be profiting from the joint exploitation of oil blocks L and M with Brunei.