MISCONCEPTION OF AN ASYMMETRIC FEDERATION 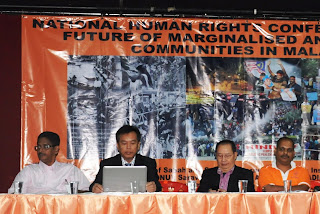 While allegations of legitimization the vast number of transition population in the state is for politicians and the various NGOs to sought out . Let us however look further into the other aspects of Jambun's speech particularly where he touches on the formation of Malaysia. Clearly here, a misconception of an asymmetric/symmetric federation or/and extreme case of an asymmetric federation warrants deliberation.

Some federations are called asymmetric because some states have more autonomy than others.

Asymmetric federalism or asymmetrical federalism is found in a federation in which different constituent states possess different powers: one or more of the states has considerably more autonomy than the other substates, although they have the same constitutional status.

The division of powers between substates is not symmetric. This is in contrast to a symmetric federation, where no distinction is made between constituent states. As a result, it is frequently proposed as a solution to the dissatisfactions that arise when one or two constituent units feel significantly different needs from the others, as the result of an ethnic, linguistic or cultural difference.

An asymmetric federation however has to have a federal constitution and all states in federation have the same formal status (state), while in a federacy independent substate has a different status (autonomous region).

An example of such an arrangement is Finland, where Åland, which has the status of autonomous province, has considerably more autonomy than the other provinces. The autonomous constituent part enjoys independence as though it was part of federation, while the other constituent parts are as independent as subunits in a unitary state.