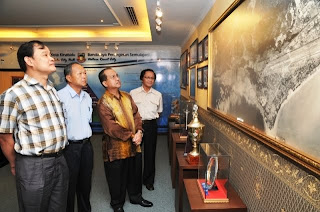 THE Kota Kinabalu Member of Parliament Hiew King Cheu was accompanied by the Member of Parliament for Beruas, Perak Datuk Ngeh Koo Ham and the Sabah DAP Vice Chairman Edward Ewol Mujie had made a courtesy call to the new DBKK Mayor Datuk Abidin Madingkir yesterday afternoon in the DBKK Mayor office at the 7th floor of Center Point KK.

They were greeted and welcomed by the Mayor Datuk Abidin in his office in the Centre-Point complex. They held very frank discussion concerning the matters arising in the Kota Kinabalu areas which some major case were brought up by the KK MP Hiew, who needed help from the Mayor and the DBKK to look into and provide assistance in the matter.

The visitors were later brought to the Kota Kinabalu Gallery in the 7th floor of the DBKK main office where there is a good display of many valuable historical photographs of KK, the Mayor wears, and some DBKK challenge trophies and many other interesting items. The DBKK gallery is open for visitors during office hours.

The Mayor Datuk Abidin welcomes KK MP Hiew to continue in working with the DBKK for the benefits of the KK folks, and he recommended Hiew for his good corporation with DBKK in terms of making KK better. Hiew said it is his job as the KK MP irrespective whether he is an opposition MP, and he has to ensure that the KK people are taken care off with highest care.

Their problem is his main concern and prime duty, and without the corporation from the DBKK and other authorities, he will not be able to perform fully. Hiew also took the opportunity to thank DBKK for the help granted to him in putting things in KK in the past and not forgetting to thanks the past Mayor Datuk Illyas Ibrahim for his constant assistance granted to make his job easy.