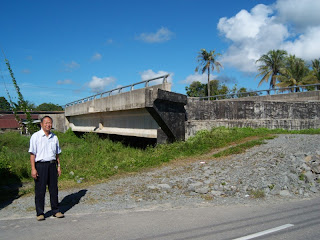 THE completed bridge in Kg Brunei, Membakut was one of the complaints received by the Kota Kinabalu Member of Parliament Hiew King Cheu during his round the state visit recently into the Beaufort district.

The bridge constructed to span over the river in Kg Brunei, in Membakut started in the year 2006 and completed in 2008 to replace a low laying timber-bridge which is subjected to constant flood in the area.

All the traffic flow will be cut off when a flood occurs. The new bridge was then constructed for the river crossing, but very surprisingly there is not connecting road being built to connect up both banks. The new bridge just sits there on its own and looks like a sculpture.

The whole project seems uncompleted and looks strange, how can you build a bridge to cross a river without any connecting road, said Hiew. There must be something wrong to the implementation and on the planning of the particular road upgrading project.

Hiew wants the JKR to explain on why this had happened, and what went wrong with their planning on building the bridge in the Kg Brunei, Membakut. The construction of the bridge and the approach road must be carried out simultaneously in order to complete the job of providing an access to get across the flooded river.

It doesn’t make sense that the bridge was completed in 2008 and it stood there for 3 years to wait for the coming of the approach road to be built. This is a real case of bad planning and management by the government.

We Sabahan had been slammed with many of such projects in Sabah, especially with projects half completed, stopped work and even abandoned totally. Someone also told Hiew that some projects where the contractors were fully paid and yet work had not even started. If that is the case, how can the Sabahan benefit from these development projects, just have to keep on waiting?

Hiew reminded the government to be more reliable and responsible at all times and show some transparency and efficiency in the administration. It is the people’s money that they are handling and spending, it must be accounted for and we expect value worth on the spending. The way we saw on how the BN government is spending our money, is convincing enough for us to think twice about whether we should continue to support the BN.