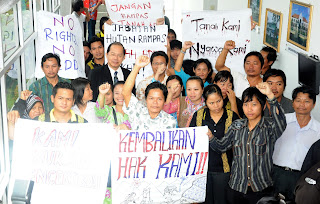 SUPPORT…. Kong posing with villagers from Keningau who have gathered at the Kota Kinabalu High Court to support the 6 native villagers who were found guilty, by the Tenom magistrate’s court on Nov 12 last year, of trespassing into the Kuala Tomani Forest Reserve and for cultivating hill paddy.

SABAH PKR has blamed the Barisan Nasional (BN) government over the losses of property right and ownership to the indigenous people in Sabah.

Its Presidential Council member, Datuk Kong Hong Ming attributed this to the failure of BN Government in formulating a land policy for the State of Sabah and the indiscriminate alienation of state land without settlement of native customary land.

“Sabah has never had a land policy. It is time, albeit long overdue, to have a policy on the management of the land resources. Land resources must be managed by the State to serve the basic needs of every man and woman who are lawfully citizen of the State, instead of electively feeding a few men’s greed,” he said.

He described the criminal prosecution by Sabah Forestry Department of six farmers who were found guilty, by the Tenom magistrate’s court on Nov 12 last year, of trespassing into the Kuala Tomani Forest Reserve and for cultivating hill paddy, as a very sad episode for mankind especially to the indigenous people of Sabah.

“Indigenous people in Sabah are being unjustly deprived of their pre-existing customary right in land thereby becoming poorer and eventually landless,” he lamented.

He regretted that after 47 years since independence since September 16, 1963, the formation of this nation with Sabah as the founding partner, law is without order and justice is far from just insofar as law enforcement and respect for fundamental and human rights are concerned.

“The indigenous people are no longer free to enter state land or to take jungle produce which were freely practiced since time immemorial before the existence of any form of governmental administration.

“Today, after 47 years of independence, the indigenous people of Sabah found themselves to be the oppressed groups under BN rule in terms of their right to property and livelihood for their ancestral land,” he charged.

Kong, who is PKR Tawau chief went on to note that complaints of land grabs and encroachments and destruction of ancestral and customary land occupied by indigenous people for generations are common events in Sabah.

He cited that recently, the Human Rights Commission of Malaysia (SUHAKAM) expressed its concern on the highest numbers of complaints received from Sabah, which amounted to 977 cases in Sabah as compared to 251 cases in Sarawak and 654 complaints in Peninsular Malaysia between 2005 to 2010.

“Today, the natives of Sabah have to compete for land ownership not only with the powerful and politically connected corporations with abundant resources, they have so often become victims of acquisition of state land by government agencies, such as SAFODA, SLDB, Lembaga Industri Getah Sabah and other GLC and corporations that are eying for land resources and joint ventures with private companies under the disguise of public purpose and development.

“In recent years, massive acreages of state land were alienated to corporations and government agencies at such amazing speed and sizes. Unknowingly to them, many natives occupying customary and ancestral land have become trespassers. They are to be evicted by the process of law,” he added.

To illustrate this, Kong cited that the BN government alienated to one private company with 60,000 hectares of state land and 10 Forest Management Units covering some 1,000,000 acres for 100 years to 10 companies encroaching vast areas of native communities and NCR land.

“In the 18 districts of Sabah, more than 32,532 native families have become victims of land grabs involving some 349,500 acres of NCR land. Despite protests and appeals, memorandum after memorandum from the native communities to BN government and leaders, the indigenous people of Sabah have continued to suffer hardship and injustice not to mention the massive losses of ancestral NCR land that they have occupied and cultivated, for as long as 7 to 12 generations in many areas, including Tongod of Kinabatangan and Serudong Laut in Nambawan,” he noted.

He thus called on the natives of Sabah to examine critically the failure and neglect of BN government in looking after their welfare and interest in breach of its fiduciary duty to the natives of Sabah as enshrined in Articles 153 and 161(A)(5) of the Federal Constitution.

On Pakatan Rakyat’s common policy framework for Sabah which was launched on 26th of December 2008, Kong asserted that it is its firm commitment to the people of Sabah to formulate a land policy for the sustainable management of the land resources to benefit the State and its people.

“Another declared commitment is to settle and return NCR land to indigenous people of Sabah as one of the top priorities of the agenda of Pakatan Rakyat Government,” he concluded.