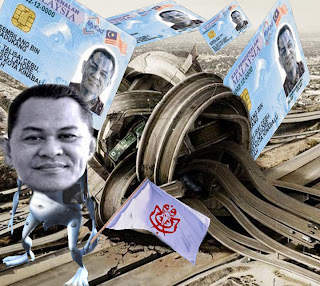 WHAT will the Government of Malaysia make of this? Government-in-exile installs Datu Mohd Akjan as 33rd ruler in a grand ceremony. With the recently publicized self proclamation the heir to the Sulu Sultanate throne by Datu Akjan an alleged co-conspirator behind the infamous Project IC.

"Project I.C for Votes: Toward a Grand Bargain on Sabah and the Illegal Transition Population" who is also believed to have benefited from the dubious scam himself, one gets an insightful with respect to the urgency and the obsession with which a handful of irresponsible politicians and their cohorts in their quest for political supremacy have ignited the flames of impending chaos throughout the country, and more particularly the East Malaysian state of Sabah.

Apparently , the legalization of their (illegals) stay and due to the short sightedness the conspirators of this heinous scam, approximately two decades after the launched of Project IC or more pointedly 'Project Mahathir' scores of recipients have emigrated to the shores of Peninsular Malaysia in search of greener pastures, largely concentrated in the states of Johore and Selangor.

The numerous allegations by many quarters the existence of a scheme dubbed ‘Project Mahathir’ and the controversies that surrounds it which among other things is claimed to have led to the legalization of illegals and the many dangers they posed serves only to inanely suggest to the government of Malaysia to recognize the likeliness there was once a clandestine operation within its ranks, in order to contribute to the formation of a pseudo-'fixed deposit’ state, have turned out to be the Hell-on-Earth for almost all its original inhabitants.

Let us analyze extensively in forthcoming articles relatively touching on this subject . In the meantime here is one writeup on the Sabah illegal immigrant controversy

A line of tailors steal a nap during the lazy, shady hours. It’s quite a delight seeing those vintage Singers still in use.

And as a solitary machine goes ‘shik-shik-shik’ in the background, the issue about Sabah’s fragile ‘social’ fabric crops up again.

Interwoven in this tapestry is a generation of carefree children, who neither read nor write, and who each morning leave their homes in the settlements at Pulau Gaya and come ashore to the city’s waterfront seeking menial work–dish washing, food preparation and packaging.

Is it fair that these children, innocent of any crime, be deprived of a promising future because of negligence by their hosts? To them a high-income economy and the New Economic Model are meaningless.

This is the tale of Sabah that has seen a population increase by a stupefying 301% in 30 years (1970-2000), a phenomenon that surely needs to be investigated closely.

Especially since neighbours Sarawak grew by 106%, and Brunei 157% in the same time-frame.

Said former Sabah senator and activist Dr Chong Eng Leong: “Sabah’s borders were deliberately kept porous. You could enter and leave it like a sieve.”

Chong believes that foreigners and the contentious Project IC are two of the biggest issues facing Sabah for over two decades.

Project IC, or more pointedly Project M, refers to the “allegation of systematic granting of citizenship to immigrants (whether illegal or legal) by giving them identity documents known as IC (identity card) and subsequently, MyKad.”

It is an alleged covert exercise with its roots in the early 1990s to alter the demographics of Sabah to make it more favourable to the ruling government and certain political parties.

“Look, in those 30 years the Kadazan-Dusun-Murut community grew by 162% – a population growth that makes sense. But those classified as Malay grew by a staggering 1,552%. The federal government hasn’t given any solid explanation for this staggering rise,” Chong said.

But despite the issue being common conversation in the warongs and kopitiams here and, to some degree, in the local media, investigations into Project IC never quite reached a satisfactory momentum nor conclusion.

Chong believes it’s because the evidence is damning-it shows up in the daily life of Sabah.

Chong has self-published a book, ‘Lest We Forget’ (Security and Sovereignty of Sabah), in July 2009- a compilation of hard facts and newspaper clippings to create public awareness of Project IC.

“Don’t get me wrong. I have nothing against foreigners…They are human beings who seek a better life; borders mean nothing to them. It is the lack of a political will in both the federal and state governments to resolve this problem that gets me (upset). They refuse to even acknowledge it’s a problem. Here they (foreigners) are considered a vote bank. I have collated the reports and evidence in my book,” said Chong.

He said the worst thing about Project IC and the influx of these immigrants is the humanitarian aspect.

“You have brought (them) in as a vote bank, offered them MyKad, given them Bumiputera status, perhaps resettled them somewhere.

“You are expected to remain grateful. No education for your children. No proper sanitary system. No refuse collection–rubbish is disposed of in the sea or burned in some common dumpyard nearby.

“It’s an epidemic waiting to happen,” he said between conversations with the local traders at the KK Handicraft Market, commonly known here as Pasar Filipina.

Chong, who speaks a variety of local dialects, believes that to properly understand the issue of Project IC, one needs to walk the problem. And that was what he did: one Saturday last year, he took this writer from the ‘Saya Anak Bangsa Malaysia’ blogsite on a walkabout.

The most tragic part of the problem is that Project IC has left the genuine local Sabahan with the short end of the stick.

“You know, conditions are even worse for the natives of Sabah. Visit their kampungs scattered all over Sabah if you can. They get no water or electricity supply. Let’s not even mention schools for the moment. We have many cases of true-blue Sabah natives who were denied MyKad even though they have birth certificates to prove their case. How can a government do this to its own people?” Chong asked.

From the charm of the KK waterfront, Chong took us across the scenic Likas Bay to Telipok, about 30 km away. Here, two government-initiated settlements have sprung up over the years.

Atop a hill lies Kampung Boronuon. The residents prefer to call it Kampung Penempatan–resettled.

They were resettled from Pulau Gaya in 2001. Back then, the mayor of Kota Kinabalu had assured the people of Telipok that the Pulau Gaya resettlers were Malaysians.

But in this part of the world, as we were beginning to see, the meaning of “Malaysian” can be as hazy as smog from the annual Kalimantan fires.

In his book, ‘Lest We Forget’, Chong cites numerous cases of dubious citizenship. Here is a sampling:

• A Pulau Gaya fag smuggler admitted in court he is a Philippine-born Malaysian, but his new IC is coded 12, that is, born in Sabah. His old IC number was H0558763, and is still registered on the Sabah electoral rolls today.

• One foreigner was convicted in 1992 for possession of fake IC and he told the court that he got his IC through Project President Mahathir (appendix 51 of book). He was jailed for two years and managed to get registered in 1995 on Sabah electoral rolls after his release–was he deported but later sneaked back? His old IC number was H0487096 and is still on Sabah electoral rolls today.

Salman had reportedly said about his IC: “Pada tahun 80′an saya telah ditawarkan kad pengenalan di Sabah semasa Projek Khas. Saya telah menerima tawaran itu bersama dengan beribu-ribu rakyat Sabah yang lain.” (In the 1980s, I was offered an identity card in Sabah under the a speical project. I accepted the offer together with thousands of other people in Sabah.)

Down in the valley from Kampung Penempatan lies a serpentine grouping of houses. This is Kampung Pelarian, otherwise known as the UNHCR Settlement Scheme. It was established in the 1970s under the care of the UN for Filipinos fleeing from the civil war in the southern Philippines.

Although the war has long since ended and UN funds ceased, the land continues to be inhabited.

Instead of diminishing in number, more houses are being built in this area. A 2006 Borneo Post report said more than 1,000 dwellings are occupying the land and growing. In both these neighboring settlements, life isn’t super.

There aren’t many in terms of amenities; there’s electricity and water supply. Waste just goes into a hole or a waterway. The residents are a hardy lot. But the story repeats – no schooling.

At about 3pm that afternoon, we noticed a dusty van passing in front of us along the narrow, winding lane. It stopped not far ahead, its body listed to one side because of the potholes.

A couple of young girls–no more than 15 years old and dressed in Tees and jeans boarded the van. Were they heading for their day jobs as dish-washers or other menial jobs at the market, we wondered? Or rather, we hoped.

For it could easily be something even worse. Something like prostitution.

It is not mere imaginings. Another excerpt from Lest We Forget:

• Six girls in vice activities in Perak in March 2002 were initially said to be Sabahans but Sabah police chief later on corrected by saying that they were Indonesians whose Malaysian ICs were issued by Sabah NRD.

If all this is true, then Project IC is not merely about the story of a power-crazed government pulling out all the stops to retain its position. It is also about the social repercussions which hurt the state and the very people who were invited inside our borders.