ROUND ABOUT OR GRAVE YARD? 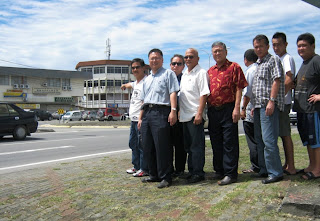 THE residents in the residential areas surrounding Towering Commercial Centre have to live in constant fear. This has been proven once again when two vehicles collided on Sunday which resulted in both cars plunged into the big monsoon drain adjacent to the petrol kiosk. To make matters worse, the accident victim was pronounced dead upon arrival in the hospital.

Dr. Roland Chia Ming Shen was at the accident site with residents nearby and also PKR Penampang Divisional leaders namely secretary Francis Mojikon, committee members, Joseph Chang, Kelly Tham Sim & Lawrence Goh. Their presence was due to many panic calls made to their PKR service centre.

According to one Liew, a local resident there, this round about is a fatal site for many accidents. According to him, there is an average of two accidents per month resulted in fatalities and casualties.

Motor vehicles always sped through the roundabout without taking into consideration of vehicles exiting from the Towering Commercial Centre or from the petrol kiosk opposite. The authorities concern should lay slow bumps along the main Jalan Penampang road so as to deter vehicles from speeding. In addition, the deep drains should be covered up with concrete slabs, preventing vehicles from plunging down the drain.

Meanwhile on behalf of PKR Sabah, Dr. Roland Chia wish to extend their condolence s to the relatives of the car accident victims.