DON’T BE FOOLED BY ‘LIP SERVICE’ 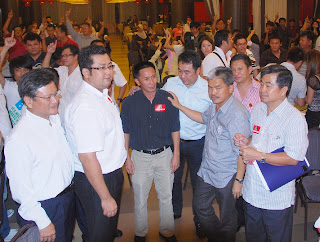 RECEPTION…. Liew (2nd from right) joins Gordon (3rd from right) Lo (right) and Kong (left) to welcome Teddy (2nd left) and others, at the reception held in Kota Kinabalu recently.

THE people of Sabah must not be easily deceived and manipulated by the ‘lip service’ and rhetorical spin of the opposition, said Gerakan National Vice President Tan Sri Liew Yun Fah.

He cautioned that all that the oppositions are good at is to politicize issues to score political mileage, in order to undermine the credibility and stability of the ruling Government.

He cautioned this while speaking at a reception dinner hosted at a leading Chinese restaurant here on Friday, to welcome a group of 200 DAP youth leaders and members from various constituencies in the state including Kota Kinabalu, Tanjung Aru, Petagas, Putatan and Papar, to join Gerakan.

“What Sabah really needs is uninterrupted development and not all the “rabble-rousing” by the oppositions that was designed to undermine the credibility and stability of the ruling Government,” he stressed.

He quipped that all that he could remember was that Wong was implicated in fencing up of an open space behind his house in Tawau, besides his controversial Sino-native status, which currently still hangs in balance.

Liew further contended that if it was true that Gerakan has lost its influence, why then are there still so many people, the youth especially, who came forward to join the party.

The former Sabah Youth and Sports Minister thus urged Ngeh not to underestimate the wisdom of Sabah people in realizing which political party is truly sincere and capable of bringing progress and development to the state, and which one is only good at giving ‘lip service’.

He cited himself for example, that he could have been the first to join the DAP after leaving his former party, Liberal Democratic Party (LDP), if the DAP’s struggle were truly worth subscribing to.

Liew contended that if DAP are really sincere in wanting to help Sabah, its Members of Parliament and State Assembly persons could always donate a portion of their monthly salary, between RM100 to RM1,000 to the various Chinese schools in the state which deserved to be helped.

“Unfortunately, all they have done all these while was to teach the people of Sabah how to condemn the ruling government and politicians,” he said.

He was thus delighted that many of Sabah DAP youth leaders and members have realized what DAP was really capable of (or incapable of achieving) and this made the right decision to leave the party to join Gerakan instead.

He however reminded the group of new members to constantly put the party’s struggle for the people above self interest.

He was convinced that if they are fully committed and are willing to work hard to carry out the party’s struggle, one day they might hold important positions in the party or, even become its President. 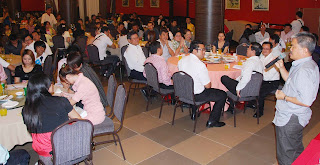 ADDRESSING…. Liew addressing the guests at the function.

He urged them to emulate the mettle of its current President Tan Sri Koh Tsu Koon in carrying out its struggle towards a better future for the nation and its people despite all the challenges faced by him.

He also reminded them to constantly reach out to those underprivileged villagers or rural folks who genuinely deserve to be assisted.

The former Merotai assemblyman also claimed that more opposition supporters including the Bumiputeras are expected to come forward to join Gerakan and other Barisan Nasional (BN) component parties, after this.

He was absolutely convinced that the people of Sabah would continue to give their undivided support to BN.