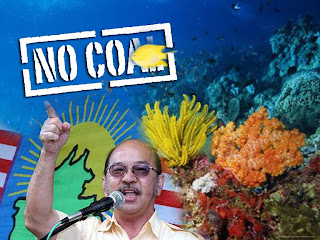 AS the people of Sabah heave a sigh of relief that ‘Sabah people power’ has defeated the bullying tactics of the BN government over the coal-fired power plant proposal in Sabah, some remaining matters need to be addressed by the government.

The controversial coal plant was one of two coal electricity generation plants announced by the Prime minster when tabling the 10th Malaysia Plan (2011 to 2015) in Parliament on 10 June 2010.

Therefore, at the coming parliamentary sitting, the people of Sabah expect a supplementary budgetary provision to be made for the laying of a natural gas pipeline from Kimanis to Sandakan and the construction of a 300MW combined-cycle gas-fired power plant in Sandakan.

If there is no such financial provision and no alternative power generation for Sabah, then the people are entitled to believe that the BN will revive the coal power plant project after the general elections.

The Prime Minister had in September 2009 at Tawau arrogantly declared that, as ‘Menteri Felda’, he had decided that the coal plant would be sited in Felda Sahabat at Tungku in Lahad Datu.

That was after the coal plant project has faced massive people power protests in Sandakan after having been kicked from Silam in Lahad Datu to Seguntur in Sandakan in 2008.

Taking the cue to please the Prime Minister, several Sabah BN YBs hurled abuses at SAPP’s assemblypersons in the Sabah Legislative Assembly during the debate on the coal plant issue.

In Parliament, SAPP’s two MPs debated not less than ten times on this issue. So, today, we hope the Sabah BN YBs have learned their lesson not to blindly support anything that comes from their KL bosses because these BN YBs have been exposed as ignorant sycophants seeking to please their bosses instead of fighting for the people.

SAPP will henceforth continue our solidarity with the campaign against the Kaiduan and Tambatoun mega dams proposals until we achieve similar success. The rejection of the coal power plant has proven that when the Sabah people are brave, united in purpose and committed, then the people can win and not be taken for granted like fixed deposits by the BN.