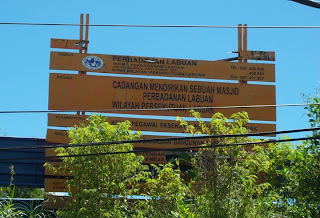 THE MEMBER of Parliament for Kota Kinabalu, Hiew King Cheu and Sabah DAP Vice Chairman Edward Ewol Mujie to Labuan Island received requests from the kampong folks in the area during their recent visit regarding the long abandoned construction work on the promised mosque at the road junction from Jalan Rajau to Kg. Tanjong Aru, Labuan. This is a project by the Labuan Development Authority.

The people told the MP and his team that the construction work on the mosque had stopped for unknown reason some years ago, and until now there is no sign of work resuming on site. The site is already fully abandoned and left with only some concrete structure only.

This mosque is essential and important to the thousands of kampong folks here where they can perform their worship and daily prayers. 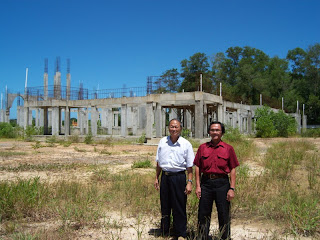 The KK MP Hiew wants the LDA to explain why the construction of the Mosque had been stopped and apparently the contractor had moved out from the site. What will be the plan for LDA to restart the building work on the much needed mosque?

We can not continue to wait indefinitely for something to happen. It is unreasonable for a project this size to seize work just like that and no body know what is going on. The general public has the right to know, and the resident in the kampongs at Jalan Rajau/Tanjong Aru are waiting for the new Mosque to be completed quickly.

In Labuan, there are some government project faced stopped work and abandoned due to some reason or rather, and the mosque project is just one of these. Hiew wants the government to pay serious attention to ensure this does not happen in the future. All projects are for the benefits of the people, and any delay will cause high loses and much inconvenience. The Labuan Bus terminal and Central Market are typical examples.