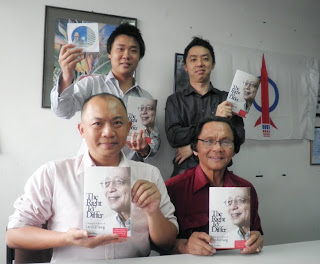 Edward Ewol Mujie the Sabah DAP Vice Chairman disclosed today that a new book entitled ‘The Right To Differ’ which is written and authored by Ooi Kee Peng about the life-long political struggle of the true politician of the DAP, Lim Kit Siang. The book was launched during the celebration dinner held in honors of his 70th birthdays in the Hotel Equatorial in Penang on the 19th of February, 2011.

This book covers the full biographical sketch of Lim Kit Siang starting from his younger days through the route of his life-long political career, the good and bad days, and including his times in prisons to stand up to defend the rights of the Malaysian and to uphold a fair society. Together included in the book, there is an attached documentary DVD entitled ‘Life and Times of Lim Kit Siang’.

The book is available on sale in the Kota Kinabalu Member of Parliament office in Foh Sang and the Inanam service centre No.2. The price is RM 30.00 per copy only. Please hurry up due to the limited copies in stock.