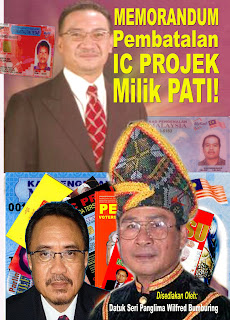 PARTI Keadilan Rakyat (PKR) Sabah Presidential Council member in charge of security and immigration, Ahmad Thambrin Hj Jaini today expressed his disappointment on the reluctance and refusal of the Minister of Home Office Datuk Hishammuddin Tun Hussein Onn to establish a Royal Commission of Inquiry (RCI) to resolve the issues and problems of illegal immigrants in Sabah.

“People of Sabah are disgusted with the indifferent attitude and inaction of the Federal Minister and BN Government in failing to resolve this outstanding problem without any solution in sight. Despite of the continual calls by many quarters including the opposition urging the Government to set up a RCI to get to the root of the problem with appropriate solutions, the minister appeared to have dismissed RCI as being irrelevant.

“Obviously, to BN and UMNO, illegal immigrants may be an election asset to them and therefore treating them as fixed deposit, especially now that general election may be near.

“Therefore, if the BN component parties of Sabah such as UPKO and PBS are truly sincere in what they said, they ought to be able to convince UMNO and BN to do the necessary. But instead, the people’s perception is that without UMNO’s blessing, BN’s component parties are merely playing lip service for cheap publicity in view of the pending general elections by making speeches and press statements selectively.

“In truth and reality, nothing has been and will be done or achieved by BN despite having won almost all the parliamentary seats in Sabah in 2008. There is no doubt that BN has failed its duty to protect the interest and sovereignty of the State despite having ruled Sabah for 47 years,” Thamrin said.

On Pakatan Rakyat’s common policy framework for Sabah which was launched on 26th of December 2008, Thamrin, the former PKR Sabah chief disclosed: “It is our firm commitment to the people of Sabah to form a Royal Commission of Inquiry to resolve the illegal immigrant problems in Sabah in the best interest of the State and its people. RCI is one of the top priorities in the agenda of Pakatan Rakyat Government”.