THE CHANGE BEGINS WITH IT'S PEOPLE 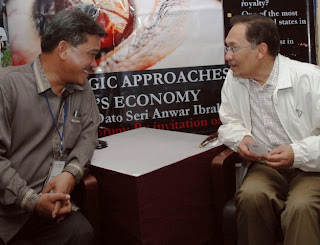 Parti Keadilan Rakyat (PKR) President, Dato Seri Wan Azizah has cross the line and vehemently refused to acknowledge the truth,when she blatantly lied to Sabahans.Who gave her the absolutely right to make use of people for her agenda,and disowned them later just to satisfy a few.The people of Sabah were strongly behind PKR,but now are disillusioned by the real stand of PKR.

We question the sincerity of the President and the party.The endless infighting,proves that PKR doesn't acknowledge that their enemies are UMNO/BN but their very own members.The very fact that the President has jump into the bandwagon and be part of the onslaught against members who were sincere in the struggle,signals the destruction of PKR in Sabah.

I call upon Sabahans,to re-assess the sincerity of PKR,as the party has lost sight of their direction in championing the rights of Sabahans.Sabah PKR Leaders,have NO Interest in their struggle for justice for the people,other then their own selfish justice and agenda.It is now crystal to Sabahans and Malaysians as a whole,when Wan Azizah stated that my Police report lodged against the self proclamation of one Datu Akjan Ali Muhammad on the 11th.Feb.2011 at the Kota Kinabalu Police Headquarters as the ‘Sulu Sultan’ was not reflective of the opinion of the party,is as good as telling Sabahans, PKR has no interest in this matter.

How can a matter that compromises the sovereignty of the country with the aim of threatening National Security,not be reflective to the opinion of the party? Is PKR condoning and supporting,the ‘Sulu Sultan’,perhaps even striking a deal with him and translating it into votes in the coming 13th.General Elections?

Sabahans have been hoodwink for the last 47 years by the current regime,don't expect Sabahans to be ‘sodomised’ by continued fabrication that PKR is capable of doing better in Sabah.

If PKR Sabah had a ‘Halatuju’, Pakatan Rakyat Sabah would be impeccable,and UMNO/BN would be running with their tails behind them.To a question if I would be joining UMNO/BN.

I'm quite sure some PKR leaders would be joining soon,there are already on going discussions and negotiations but I would rather starve then to join UMNO/BN,my cause and struggle is for justice and restoring the dignity and rights of the people of Sabah,and Malaysians as a whole.We must continue to engage as change is inevitable.

This is a matter of morality and dignity,and Sabah PKR has no idea whatsoever what it means.The current leaders will fight tooth and nail to maintain their positions,all in the name of being candidates in the coming elections.Continued rhetoric's will be heard,at the expense of the people.Politics is not dirty as some may perceive,it's the politicians that makes politics dirty.

I stand firm when I said, "there is an over dose of politicians,but sadly no leaders".