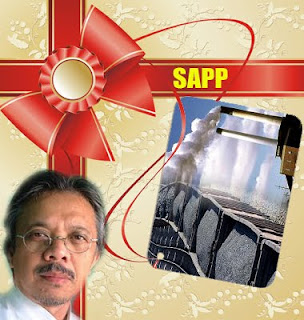 I only congratulated NGOs, which worked very hard in their objection to have coal power plant scrapped all together. The project is unnecessary in the first place.

Overjoyed says the headline of the paper. But for me it was silly affair. Wasting our time, money and energy, all these efforts should have been used elsewhere to benefit the rakyat when scientifically we know it’s disastrous for human and nature for generations to come.

I believe many leaders knew too the repercussion of coal plan in Sianakut Lahad Datu. Once was to be in Sandakan and twice back and forth to Lahad Datu.

It’s all about money I supposed. There are people benefits from coal plant negotiations-Thus they defended like hell.

Once was illogical decision, coal were to be imported from Kalimantan, papers were signed according to the explanation given by SESB officials during one of the dialogues in Kota Kinabalu.

I remember seeing one lone civil servant represented the government that day making a mockery of himself argued the good side of having coal plant-there is no good side- what I called ‘bodek’ of the highest degree.

After quiet a spell, decided again that coal would come from China and all we know machineries were to come from China when China itself is departing and minimizing the use of coal.

Thus I find congratulating the government is weird, which unnecessarily creates trouble.