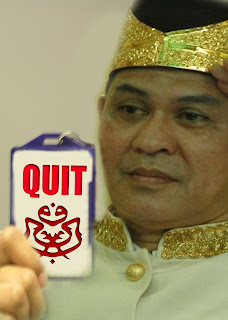 DATU Dr Mohd Akjan Bin Datu Ali Muhammad today announced that he has resigned as a UMNO member for its Gaya division with immediate effect.

In a statement issued today, he said he was sad that it has reached a point of no return where he has no choice but to leave the one-and-only political party which he had been with for more than two decades, especially after having contributed to its growth and expansion in many ways, which he said he reserved the absolute right “to fully explain it” when the right time comes.

“Hence, there’s no need for anyone to bring the matter concerning my membership in UMNO to the Supreme Council for deliberation and decision,” he said.

He noted that copies of his resignation letters were submitted to both the UMNO Headquarters in Kuala Lumpur, as well as in Sabah, today.

He emphatically maintained that the recent series of media attacks and police reports lodged on him by certain organizations and individuals in Sabah, following the news reports on his purported ‘coronation’ as the 33rd reigning sultan of the Sulu Sultanate on 2 February, 2011 were politically-motivated and with malicious intent to ‘characteristically assassinate’ him.

He also regretted that this has subsequently caused his entire family including his children aged nine-and-above been picked-up and investigated by the police.

“I shall reserve my right to take legal action against this group of individuals and organizations,” he asserted. He nonetheless considered the event a blessing-in-disguised as it allowed him to see who his true allies and foes are.

Akjan categorically reiterated that what actually took place on that particular day at one of his properties in Kampung Likas here, was just a ‘Majlis Doa Selamat Dan Kesyukuran’ (thanks-giving ceremony), following his acceptance of the offer and mandate from the Sulu interim government to be the 33rd reigning Sultan of Sulu, and not a coronation ceremony as what had been wrongly interpreted and was subsequently blown out of proportion by a certain individuals and groups of political interest.

He claimed that prior to the said ceremony, he had in fact promptly and personally informed and briefed the Officer of the Special Branch (SB) of Kota Kinabalu District, of what was going to happen on that day.

“I in fact even invited him and his officers to attend and to witness the ceremony but they said there was no need to do so since I have briefed them on it,” he disclosed.

He said he had fully briefed the SB chief and his officer during their meeting in the Hyatt Kinabalu Hotel here, among others informing them that he had in fact turned down the offer by the Sulu interim government and relevant senior officials of the Sulu Sultanate, thrice, but subsequently gave in to their sincere plead.

He also sworn that he had never lobbied nor was he interested to be the Sultan as he fully understands its heavy responsibility, risks and challenges that come with it.

He explained that he was shortlisted and offered the position, following a thorough investigation and examination conducted by the senior officials of the Sulu interim government and the Palace, which confirmed that he is indeed a direct descendant of the last reigning Sultan of Sulu, Paduka Mahasari Maulana Al-Marhum Shariful Hashim 1.

Akjan further explained that one of the main reasons behind his acceptance of the offer was due to the fact that the Sulu interim government and senior Palace officials had agreed to his condition and request to drop the ongoing claim on Sabah by the Sultanate. This will be officially made known to the United Nations (UN) and the International Court of Justice (ICJ) in The Hague, Netherlands.

“This was formally agreed in a written agreement which was signed by me during the majlis doa selamat dan kesyukurun and was witnessed by more than 60 people, including the Prime Minister of the Sulu interim government, Datu Albi Ahmad Julkarnain, and the various representatives of the Council of Royal Datus, the Royal Houses of Maimbung and Patikul,” he pointed out.

He thus asserted that his acceptance of the Sulu interim government’s offer to be their Sultan, with the chief aim of restoring the Sulu Sultanate’s long subdued sovereignty, was partly because he had the interest and wellbeing of Malaysia in his utmost consideration due to his love for Malaysia since he is a bona fide Malaysian citizen, besides in the true spirit of Muslim brotherhood.

“Let me assert here in no uncertain term that I have not gone crazy as what some of my critics thought and described, and I am fully aware of what I am doing, even if it means I have to sacrifice my Malaysian citizenship and even my life, for my struggle for truth, justice, peace and the betterment of my Muslim brothers and sisters in Malaysia and in Sulu,” he asserted.