WHAT SAPP MEANS ON AUTONOMY? 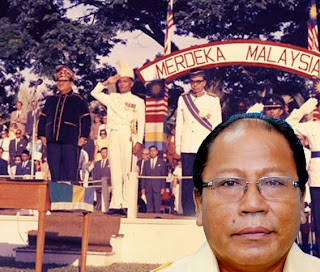 SABAH Progressive Party (SAPP) Vice President, Dullie Haji Marie, said the issue of restructuring federal-state relations needs to be looked into seriously by Sabahans in this coming. He said the existing federal system of government needs to be transformed from centralised to a more co-operative system.

“We have to realize that Malaysia was created by Malaysian Agreement signed in London on 9th July, 1963. The parties involved in this treaty were the United Kingdom, Federation of Malaya, Sarawak, Singapore and North Borneo (now Sabah).

“The agreement contains 10 articles. Article VIII stipulated that “the Government of Malaya, North Borneo and Sarawak will take such legislative, executive or other action as may be required to implement the assurances, undertakings and recommendations in Chapter 3 of Annexes A and B to, the Report of the Inter-Government Committee signed on 27th February 1963, is so far has not been implemented by express provision of the Constitution of Malaysia.”

“The Inter-Governmental Report (IGC) had referred to the Cobbold Report dated on 21st June 1962. It was appointed by the United Nations to ascertain and make recommendation on the views of the people of North Borneo and Sarawak on the question over the formation Malaysia. The commission considered the 20 Point and 18 Point Memorandums respectively.

“In addition Malaysia Solidarity Consultative Committee Memorandum on Malaysia signed on February 3, 1962 had put on official record on the promise of Borneonisation that reads as.“

In the case of federal services, the committee welcomes the assurance given by the Prime Minister of Federation of Malaya on January 6, 1962 at Kuala Lumpur meeting of committee when he stated, “ I can also give categorical assurance that there would be a progressive Borneonisation of public services in the Borneo territories and in addition the people of the Borneo territories would have new opportunities to serve in high appointments in the Federal service. Of course, as I have declared before, nothing should be done to disrupt the present machinery of the Government. Expatriate officers who are now servicing the various territories would continue to do so until suitable local officers are found to take place.”

“Further, the Lord Cobbold recommended that “the federal services in the Borneo territories should be regionalized and officers should be appointed in the territories with sufficient authority to deal with local matters. I add a personal recommendation that, when expatriate officers are no longer needed for these posts, they should normally be filled by officers from Borneo territories.”

“Sabahans know the promises, inducements and guarantees made by Malaya and the British government have not been fully complied and honoured. Our views should not be perceived as anti-Kuala Lumpur. Further, our demand on autonomy is not tantamount of denying the Federal Policies such as on National Defence, International Security, Foreign Policies and so forth that are outside the jurisdiction of the State policies. We also want to make it clear as a loyal Malaysian that we have nothing against our fellow Malaysian from Peninsula. We strongly subscribe to the concept of multiracial and integration through diversification.

“Let us revisit on the issue of illegal immigrants (PTI). This problem has been with us for ages. Despite our constantly voicing on the setting of Royal Commission of Inquiry, the calls only fall on deaf-ears and with unbelievable reasons. Just few months back the same subject has been raised in Parliament when our Home Minister requested for more proofs. The requested proofs were given yet no tentative solutions are forthcoming.

“The latest call on the need of setting a Royal Commission of Inquiry has been made over the proclamation by an individual as 33rd Sultan of Sulu in Sabah’s soil. The same Minister made a statement that the findings of the so-called special laboratories for PTI has been recommended and submitted to the state government although many with the opinion that no such recommendation has been made.

“This only shows that Federal leaders are not only unsympathetic but also failed to honour the promise as stipulated on various provisions of the Malaysian Agreement. Another flagrant example is over control of the inflow and outflow of immigrants to the State. It should be under the power and jurisdiction of State.

“This is specifically stated by the 6th Point of the 20-Point Malaysian Agreement as quoted “Control over immigration into any part of Malaysia from outside should rest with the Federal Government but entry into North Borneo should also require the approval of the state government. The federal government should not be able to veto the entry of any persons into North Borneo for the State Government purpose except on strictly security grounds.”

“The big question is why after 47 years we are still experiencing the shortage on teachers,” reiterated.

“As quoted what Datuk Herbert Timbon Lagadan said “Some Sabahans who attended the open interview sessions claimed that they turn up in thousands for the interview sessions but only a handful were successful while the majority (of the successful candidates) was from West Malaysia”. What he implied was that there is discrimination in the recruitment system as the recruitment was centralized in Kuala Lumpur.

“The other issue is the requirement on human resources for teachers in Sabah, it seems there is no proper planning to address this problem. The statement by Datuk Masidi is to confirm this point.

He said, “This happens every year. We are losing all these experienced, trained and qualified teachers and are left to go back to basics when the new ones arrive.” He even further said, “We in fact, have more enough teachers but lacking those subjects like English, Mathematics and Science. If they keep sending these teachers here, it will never solve the problem, what we to do is to recruit locally. I am saying that I am anti-West Malaysian but we maintain the seniority of teachers, plus solving many other problems.”

His statement implied we Sabahans capable of managing our own affairs. It sound ironic the future of our generations is to be decided by those from Peninsula. Sabahan should change their mindsets that they are as capable as those from the Semenanjung.

“The Federal Government must honour the spirit of the 1963 Malaysian Agreement as Lord Cobbled in his report stated as quoted “It is a necessary condition that, from the outset, Malaysia should be regarded by all concerned as an association of partners, combining in the common interest to create a new nation but retaining their own individualities.

“If any idea were to take root that Malaysia would involve a ‘take-over’ of the Borneo territories by the Federation of Malaya and the submersion of individualities of North Borneo and Sarawak. Malaysia would not in my judgement be generally acceptable or successful.

“These are only among of the provisions in the Malaysian Agreement that has been blatantly ignored. Should we are given the mandate in this coming election our course of actions is to ask the federal government to fully honour and implement the Malaysian Agreement. Likewise the ex-colonial master, UK government, is also bound and responsible to explain over the non compliance of this agreement.

As one of the partners in the agreement it is our duty to seek explanation from both parties over our position in accordance with the MALAYSIAN AGREEMENT.