SABAHANS RELUCTANT TO BE TEACHERS? 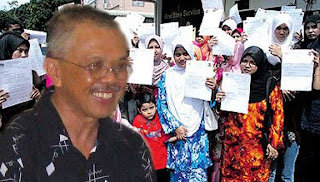 TAN SRI Joseph Pairin Kitingan, Deputy Chief Minister and other Minister that concerns with State education should persistently not only ask but should initiate to give clear views of Sabah problem of teachers to the Minister of Education especially about the shortages and the condition of Sabah teachers in rural areas.

Sabah teachers, representatives and general public at large in Sabah have asked many questions, including memorandum submitted to authority like the one by Lahad Datu group headed by Rahimah Sukam last year, but no answers are forthcoming.

The 73 contract teachers who submitted memorandum mentioned above even proposed for ‘Kursus Dalam Cuti’ and Course for graduates of untrained teachers in order for them to be accommodated in teaching profession.

With regard to some 578 mentioned by Pairin - Guru Sandaran-attachment teachers whose term ended last year not continued, not knowing where to head, when equally jobs are scarce in Sabah was really creating mind-boggling.

What wrong with them, are they not fit to be teachers when they were already no less committed than the full pledge teachers?

What other qualities are required. I’m sure they wouldn’t mind undergoing training if asked?

I read from Berita Harian on line-there are occasions that temporary teachers were more responsive and dedicated to their job compare with the trained teachers.

I’m pretty sure lot of Sabahans want to become teachers. This sentiment has been shared by Sarawakians as well see below.

The Ministry is thinking of recruiting from Peninsular the so-called to fill up the gap. Fair enough if there is no takers from Sabah but before agreeing to this I really want to see the statistics because there have been so many conflicting reasons.

I still remember the uproar from Sabah public last year when 400 computer technicians from Peninsular were sent to various schools in Sabah, and on arrival they found no place to stay. The authority can’t just dump humans; I supposed education department know the availability of facilities, and that should be in inventory.

The irony was these computer technicians were only SPM school leavers, Sabah has unemployment problem of this age group. This is what I call a bit of lack of foresight.

The Deputy Education Minister Dr Mohd Fuad said the number recruited from Sabah in the one open interview was still small. But do we have the statistics?

Last year in Sarawak, according to the Chairman of Teachers Association for Sabah and Sarawak, William Ghani Bina there are about 3000 teachers from Peninsular teaching in Sarawak. When Sarawakians applied to become teachers it was always difficult to get, he said. That too I want know the real reasons.

I would also like to question the Ministry of Education what are the main reasons behind that Sabah and Sarawak schools could not even get into the top 20 list?

My attempt to get some statistics from the Education Department I wanted has not be encouraging so far but will continue doing it.